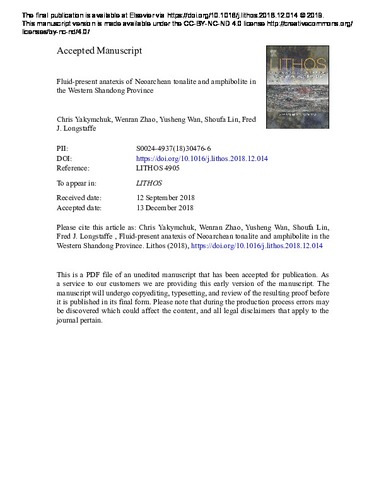 Metatonalite and amphibolite from the Taishan region of the Western Shandong Province in the North China Craton record c. 2.60 Ga fluid-present partial melting via the breakdown of biotite, plagioclase and quartz to produce peritectic hornblende and anatectic melt. Eight paired leucosome–melanosome samples from metatonalite and three paired samples from amphibolite were investigated to evaluate the composition of the melt. Hornblende, biotite and plagioclase in the leucosomes and hornblende and plagioclase in melanosomes from both rock types have similar compositions. Two leucosome samples from the metatonalite were influenced by the removal of heavy rare earth element-rich hornblende and the accumulation of plagioclase. The other leucosomes are interpreted to represent near initial melt compositions with a minor component of peritectic hornblende and are enriched in Si, Na and Sr and depleted in K, Ca, Ba and Rb relative to melanosomes. The enrichment of Na in the melt is inconsistent with experimental results of fluid-present melting of tonalite, but is broadly consistent with the experimental results of fluid-fluxed melting of amphibolite. The absence of K-feldspar in both rock types is a critical control on the composition of anatectic melt and initial melt compositions were probably similar for both rock types. Leucosomes inherited rare earth element patterns from their sources, which suggests that some trace element diagrams used to infer tectonic settings and depths of melting are not appropriate for reworked components of Archean grey gneisses. Whole-rockδ18O suggest that the fluids responsible for inducing local melting were derived from the intrusion and crystallization of ~2.60 Ga tonalites and trondhjemites in the Taishan region. One amphibolite sample has a relatively low δ18O suggestive of interaction with meteoric water or seawater possibly related to crustal extension and asthenosphere upwelling at ~2.60 Ga. Fluid-present partial melting reworked 2.75–2.60 Ga tonalites and amphibolites, generating ~2.60 Ga sodium-rich components of grey gneisses in the Western Shandong Province.