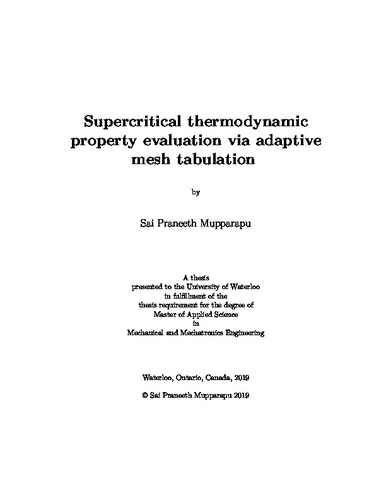 Obtaining accurate computational simulations of fluid flows with a complex thermodynamic behaviour is difficult. This is partly due to the non-linear variation of thermophysical properties in the vicinity of critical point. Supercritical fluid flows are observed in a wide range of applications such as caffeine extraction, supercritical diesel fuel injection, nuclear reactors, and liquid rocket engines. In the near-critical regime, thermodynamic properties are accurately described by a multi-parametric equation of state, but most often using such complex state equations involve expensive computations, thereby consuming a significant portion of the available computational resources. To mitigate this issue, tabulation of state equations stands as an alternative yet they are inefficient due to the strong non-linear property variation in the proximity of critical point. In this thesis a novel tabulation method based on adaptive mesh refinement (AMR) approach is presented, it enabled accurate thermodynamic and physical property evaluation with minimal computational effort. Detailed analyses in the form of error validation, computational cost comparison were performed with reference to the commonly used cubic equations of state. In order to demonstrate the grid scaling effects on total computational cost of a real-fluid CFD simulation, a one dimensional harmonic acoustic wave case was chosen. We show a significant computational cost reduction with the adaptive tabulation approach relative to the cubic state equations (with an underlying iterative root-finding method). It also offered an accurate emulation of the backend equation of state with significantly less computation cost. The developed adaptive tabular equation of state is also integrated into a Computational Fluid Dynamics (CFD) code which has numerical techniques enabling computation of flows with large density gradients. To validate this CFD solver and to observe accurate thermodynamics effects in gasdynamics simulations, the Sod-shock tube and Shu-Osher shock tube problems were solved computationally for both perfect, real fluid thermodynamics. Also the sod-shock tube problem was simulated with three different thermodynamic initial conditions (supercritical, nearcritical, subcritical regions) the nearcritical case has shown a relatively smaller change in temperature, pressure at the shock contact while having a large change in density compared to two other scenarios. It represented the underlying supercritical thermodynamic behaviour that the density increases drastically with a relatively small change in temperature.