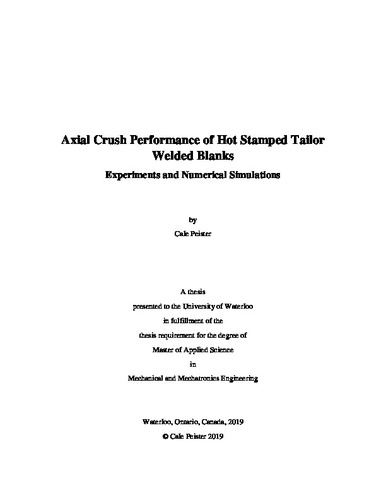 This thesis investigates the axial crush performance of hot stamped tailor-welded blanks (TWBs) and their potential for weight reduction in the front crush structure of a vehicle. A baseline demonstrator structure, fabricated from the mass-production front side frame of a large sport utility vehicle (SUV), was subjected to a dynamic crush test performed at a speed of 50-56 km/h. The collapse mode and load-displacement history were characterized to establish the baseline performance when using conventional high strength steels. TWBs comprising ultra-high strength Usibor® 1500-AS and more ductile Ductibor® 500-AS were studied. Five configurations of top-hat channels were formed: non-tailored monolithic Ductibor® 500-AS in 1.2 mm and 1.6 mm thicknesses, common-gauge Usibor® 1500-AS welded to Ductibor® 500-AS TWBs in 1.2 mm and 1.6 mm thicknesses, and a multi-gauge TWB comprising 1.2 mm Ductibor® 500-AS and 1.6 mm Usibor® 1500-AS. After forming, the monolithic and common-gauge parts had relatively uniform hardnesses in each material, with the Usibor® 1500-AS and Ductibor® 500-AS achieving 490 HV and 230 HV, respectively, and the hardness transition across the laser weld line was just 2 mm wide. The multi-gauge TWBs were formed in a new die that could accommodate the step in thickness. These reached hardnesses of 540 HV and 250 HV respectively due to increased quench rates in the new die. Formed monolithic Ductibor® 500-AS channels were spot welded to flat backing plates of ferritic/bainitic JAC590R steel with a 590 MPa strength to form three point bend specimens, and were tested under dynamic and quasi-static conditions. The high ductility of this material allowed these rails to fold tightly without any fracture. In dynamic tests of 1.2 mm specimens, the specimens exhibited two distinct deformation modes: wrapping and folding. In the wrapping mode, sufficient friction between the impactor and specimen prevents sliding so the specimen wraps around the impactor, whereas in the folding mode the specimen slides across the surface of the impactor and forms a tight fold. The results were very repeatable and displayed positive rate sensitivity. The thicker 1.6 mm specimens sustained more load and absorbed more energy than the 1.2 mm specimens. Formed channels in all five configurations were spot welded together in pairs to form axial crush rails, and were tested under dynamic and quasi-static loading. The monolithic Ductibor® 500-AS specimens had a tendency towards global buckling, especially in the 1.2 mm thickness. The TWB specimens were stabilized by the hard section clamped in the fixed end of the rail, preventing buckling and promoting progressive axial folding. The Ductibor® 500-AS formed very tight folds without fracture or cracking. Once this soft zone fully consolidated, the hard Usibor® 1500-AS begin to crush and fracture as it increased the crush load to resist intrusion. The 1.6 mm common-gauge TWB absorbed the most energy in the dynamic (31.8 kJ) and quasi-static (29.8 kJ) tests. This 1.6 mm TWB configuration also had the least amount of fracture because the majority of the test energy was absorbed by the thicker 1.6 mm Ductibor® 500-AS. Numerical models of the three point bend and axial crush experiments were developed in LS-DYNA to simulate the crash behaviour. The models of axial crush had very good agreement with the experimental results. The models of three point bends also matched very closely with the experimental results, with the exception of the 1.6 mm quasi-static condition in which the curves match initially but diverge partway through the experiment. After showing that Ductibor® 500-AS performs well in an energy absorbing crush application, its performance in the crush tip of the baseline demonstrator structure was predicted. The constitutive and fracture properties of Ductibor® 500-AS were substituted for the JAC590R in a crash model of the crush tip region of this structure. The folding modes and load-displacement response predicted for the hot stamped Ductibor® 500-AS crush tip were very similar to the predictions for the baseline condition with JAC590R. In addition, the baseline model was validated by performing crush experiments on the baseline crush tips with very good agreement between the experiment and model. The results of this research demonstrate that Ductibor® 500-AS has significant potential for direct substitution of 590 MPa strength conventionally stamped in crush applications. This outcome supports the use of a hot stamped TWB frontal crush structures comprising Ductibor® 500-AS in the energy absorbing zone to absorb energy, and Usibor® 1500-AS in the rear section to resist intrusion into the passenger compartment. The use of ultra-high strength Usibor® 1500-AS will allow for weight reduction through use of thinner gauge sheet. The use of a laser welded blank consolidates multiple parts into one, eliminating numerous spot welds and other joining processes from the final assembly. In future work, the suitability of higher strength Ductibor® 1000-AS for crush structures should be investigated for further weight reduction potential.