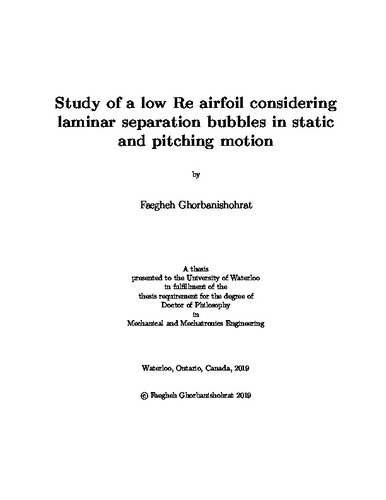 Performance of low Reynolds number (Re) devices is highly dependent on their airfoil design. Small wind turbines that usually work in areas with poor wind resources with a vast application from remote to busy urban regions are no exception. The unsteady flow field around the turbine blade results in an unsteady boundary layer that makes aerodynamics of these turbines complex and interesting. But due to the complexity of unsteady low Reynolds flow, and the small scale of boundary layer flow there are still unanswered questions in this area. Therefore, this study is arranged to fully investigate low Reynolds number boundary layer flow in steady and unsteady flow using small scale experiments. For this goal, three non-intrusive experimental techniques used to study low Re flow behavior over a miniature SD7037 airfoil including surface oil flow visualization (SOFV), IR-Thermography (IT), and particle image velocimetry (PIV) at 14000 < Re < 48000 have been developed and utilized. To model unsteady flow a pitch oscillation about the static stall angle of attack with amplitude 9 was considered. The quality of acquired results from all the experimental methods confirms the possibility of downscaling of low Reynolds flow experiments. Flow parameters such as the separation and reattachment points were quantitatively determined from SOFV and IT. The high-resolution PIV measurements provided an accurate velocity field so that surface pressure distribution and estimation of skin friction coefficient were determined from the velocity fields in both the steady and unsteady flow where due to the scale of the experiment and low magnitude of shear stress other measurement techniques would be intrusive or cannot be used. Estimated surface pressure coefficient (Cp) from PIV data revealed vortical structure effects as low-pressure waves that cannot be captured with coarse resolution methods. Integral boundary layer parameters are calculated in steady and unsteady conditions that provide in-depth information regarding low Re boundary layer flow behavior and laminar separation bubble characteristics. Boundary layer flow and reversed flow under the separated bubble were captured precisely while the Field of View covers the whole airfoil and results were confirmed by acquired data using finer spatial resolution. The measured aerodynamic force shows the effect of the height of the bubble on increasing the drag and the proper orthogonal decomposition method provided more information regarding the time-dependent behavior of vortices.