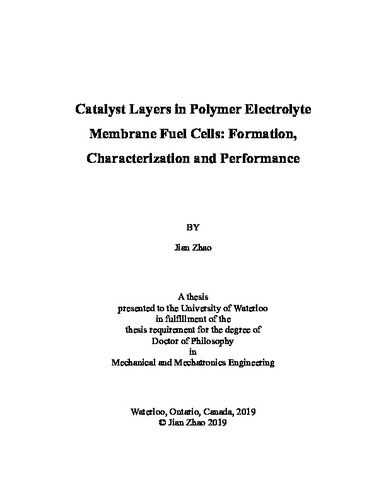 The structure of the catalyst layers (CLs) has a decisive impact on the performance, durability, and cost of polymer electrolyte membrane (PEM) fuel cells – these are the main technical challenges to the commercialization of PEM fuel cells. The porous CL conventionally consists of carbon-based platinum (Pt/C) and ionomer (Nafion polymer). An ideal CL should maintain the desired structure with sufficient gas diffusion and water removal channels (pores), proton transport media (ionomer), electron travel pathways (catalyst particles), and optimal three-phase boundaries (TPBs) where electrochemical reaction occurs (reaction sites). Practically, the CL is formed during the fabrication process which determines the physical structures, often represented by porosity, mean pore size, pore size distribution (PSD) and specific surface area. The physical structures, in turn, determine the effective transport properties such as effective mass diffusion coefficient and permeability for the reactant in the CLs. However, there is still no clear understanding of what is the optimal structure for the CLs. To investigate the structure of CLs, three aspects are studied in the present thesis work: (i) the effect of fabrication process on the resulting structure, (ii) the effect of the CL structure on its macro-properties, and (iii) the effect of the structure and macro-properties on the mass transport phenomena and the associated cell performance. Many factors including fabrication techniques and CL compositions have a significant impact on the structure formation of CLs. However, how these factors affect the structure is still unclear. Additionally, there lacks experimental characterization of the structure such as porosity, PSD, specific surface area, mean pore size, and surface fractal dimension, as well as mass transport properties such as effective diffusion coefficient and gas permeability for the CLs in literature. With the experimentally determined structural and mass transport parameters of the CLs and the associated electrodes, the mass transport phenomena in PEM fuel cells can be quantitatively analyzed. In the present thesis work, the CL pore structure is experimentally characterized by the method of standard porosimetry (MSP), which is established based on the phenomenon of capillary equilibrium in the wetted porous materials. By the means of MSP, a comprehensive characterization of the structure in terms of porosity, PSD, specific surface area, mean pore size, and surface fractal dimension is obtained. In addition, the effective diffusion coefficient of the CL is studied by the modified Loschmidt Cell, built based on the Fick’s law of diffusion. The parameters including effective diffusion coefficient, diffusion resistivity, and its relation with the porosity and mean pore size is investigated. Further, the permeability is measured based on Darcy’s law via a custom-engineered apparatus developed in my thesis work. The effect of Pt loading, temperature, flow rate, and gas species is explored in this thesis study. With the experimentally determined pore structure characterization and mass transport properties, a numerical study is performed for the better understanding of the mass transport mechanisms in the porous electrodes. The cell performance conducted in our lab is also reported in the present thesis for a better understanding of the ex-situ experiment and a comparison with the numerical modeling. The experimental and numerical studies presented in the present thesis work is of great significance to (i) understand the structure of the CLs, (ii) to understand the relation between the structure and the mass transport properties such as the effective diffusion coefficient and permeability, and (iii) to understand the effect of the structural parameters and mass transport properties on the mass transport phenomena and hence the cell performance in the PEM fuel cells.