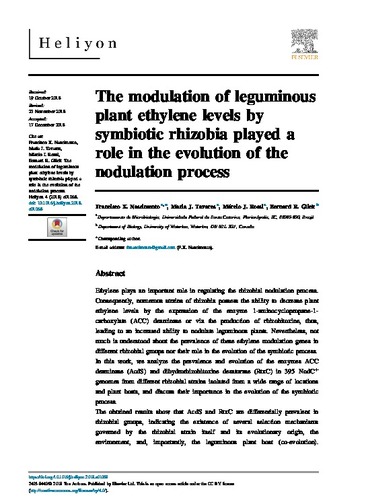 Ethylene plays an important role in regulating the rhizobial nodulation process. Consequently, numerous strains of rhizobia possess the ability to decrease plant ethylene levels by the expression of the enzyme 1-aminocyclopropane-1-carboxylate (ACC) deaminase or via the production of rhizobitoxine, thus, leading to an increased ability to nodulate leguminous plants. Nevertheless, not much is understood about the prevalence of these ethylene modulation genes in different rhizobial groups nor their role in the evolution of the symbiotic process. In this work, we analyze the prevalence and evolution of the enzymes ACC deaminase (AcdS) and dihydrorhizobitoxine desaturase (RtxC) in 395 NodC+ genomes from different rhizobial strains isolated from a wide range of locations and plant hosts, and discuss their importance in the evolution of the symbiotic process. The obtained results show that AcdS and RtxC are differentially prevalent in rhizobial groups, indicating the existence of several selection mechanisms governed by the rhizobial strain itself and its evolutionary origin, the environment, and, importantly, the leguminous plant host (co-evolution). Moreover, it was found that the prevalence of AcdS and RtxC is increased in Bradyrhizobium and Paraburkholderia, and lower in other groups. Data obtained from phylogenetic, evolutionary as well as gene localization analysis support the previous hypotheses regarding the ancient origin of the nodulation abilities in Bradyrhizobium and Paraburkholderia, and brings a new perspective for the importance of ethylene modulation genes in the development of the symbiotic process. The acquisition of AcdS by horizontal gene transfer and a positive selection in other rhizobial groups indicates that this enzyme plays an important role in the nodulation process of many rhizobia. On the other hand, RtxC is negatively selected in most symbioses. Understanding the evolution of ethylene modulation genes in rhizobia may be the key to the development of new strategies aiming for an increased nodulation and nitrogen fixation process.