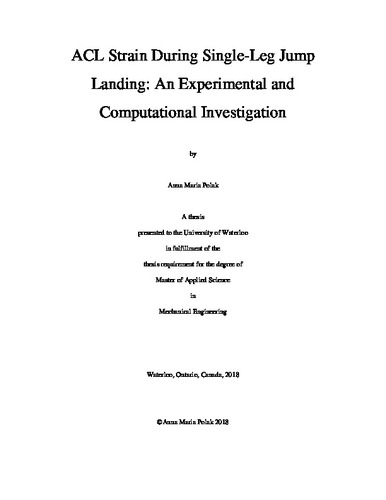 The anterior cruciate ligament (ACL) is a commonly-injured ligament in the human knee joint. ACL injury repair is a costly procedure; however, left unrepaired, ACL injuries can lead to complications later in life. In order to understand ACL injury, metrics such as strain in the ACL are measured under various loading conditions. A motion which has potential to cause ACL injury, a single leg jump landing, was replicated and ACL strain was recorded. Two common approaches for this purpose are in-vitro studies involving cadavers, and finite element (FE) modelling of the knee joint. Once ACL strain during the potentially injurious motion is evaluated, it is easier to work towards potential improvements to protective or rehabilitative equipment, such as knee braces. The objective of the current study was to measure ACL strain during a single leg jump landing using two different methods: 1. In-vitro experiments involving cadavers: - ACL strain vs. time was measured with unbraced and braced cadaver knees. 2. Finite element modelling of the human knee: - The finite element model was assessed using the in-vitro experiments, and can potentially be used to evaluate braced knee conditions in the future. The inputs for the experiments and finite element model were taken from motion capture, which was done in-vivo on two participants in a previous study. The two participants provided input kinetics and kinematics of a single-leg jump landing. The kinematic and kinetic inputs were then applied to three cadaveric specimens using the dynamic knee simulator (DKS) at the University of Waterloo, and ACL strain relative to the beginning of the trial was measured. The cadaver knees were also tested wearing an Össur CTi Custom knee brace, and the effect of the knee brace on relative ACL strain was measured. A finite element model of the human knee joint was also investigated by extracting the right leg of an existing full human body model, the Global Human Body Model Consortium (GHBMC) average-sized male (M50) model, and updating some of the tissue mechanical properties. The same boundary conditions from the experimental iv study were applied to the GHBMC right leg model, and relative ACL strain was calculated and compared against the experimental data. The experimental maximum relative ACL strain for an unbraced full jump landing was 0.032 and 0.057 for participant #1 input and 0.062 for participant #2 input. The computational maximum relative ACL strain was 0.042 for participant #1 input and 0.139 for participant #2 input. The finite element model was able to replicate the experimental ACL strain vs. time curves reasonably well, with a mean squared error of less than 0.01 for all loading scenarios. The results of the unbraced vs. braced jump landing experiments showed that the knee brace had no effect on ACL strain. The mean squared error between unbraced and braced ACL strain vs. time curves was less than 0.0011 for all loading cases, which is a low error value when compared to strains in the range of 0.015- 0.089. The jump landing finite element model is an important first step in using finite elements to predict relative ACL strain during jump landing. Future research directions include study of factors affecting ACL strain, incorporating the knee brace into the finite element model to investigate possible improvements to the brace, and investigating the benefits of adopting a subject-specific geometry for the model.