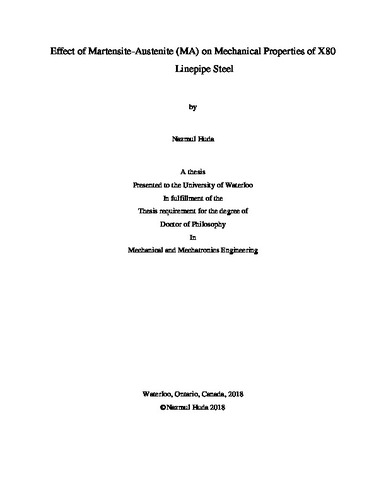 The aim of the present work is to dispel some of the controversy involving Martensite-Austenite (MA) in pipeline steel welds. The fraction, size, morphology and distribution of Martensite-Austenite can have considerable impact on the properties of the Heat Affected Zone (HAZ) of pipeline welds, where variations in welding parameters can lead to different peak temperatures and cooling rates, which determine the characteristic features of MA. Recently, MA microconstituents have been under scrutiny because of the significance of MA on mechanical properties is ambiguous, particularly in terms of tensile and toughness properties. The role of MA on mechanical properties has become a more active research subject due to a lack of knowledge combined with contradictory evidence. The first part of the current research focuses on evaluating the role of MA size, fraction, morphology and distribution effect on the strength and ductility of HAZ in API X80 steel Gas Metal Arc Welds (GMAW). Higher fraction of coarse MA leads to increased strength however result in a loss of ductility. A lower fraction of finer MA microconstituents lead to improvements in ductility. The ductility is found severely impaired due to formation of closely spaced voids around the MA, along with debonding of MA from the matrix, which occurs just above the yield stress. MA constituents initiate premature void nucleation during straining, which is explained by a difference in the nanoindentation hardness of the MA (dominant in martensite but small austenite) versus the ferrite matrix. Further study performed by thermal simulation using a Gleeble system that produces two different microstructures using two different cooling rates. Variation in cooling rate causes a difference in MA size, distribution, and morphology; while the fraction of MA remained comparable. A higher cooling rate exhibited higher tensile strength and ductility compared to a slower cooling rate. The MA microconstituents formed at slower cooling rate are coarser, which tends to initiate voids more readily under tensile strain. These coarser MA microconstituents were also surrounded by ferrite grains which exhibited higher local grain misorientations. This led to inhomogeneous deformation and enhanced dislocation activity during straining, accelerating void formation, and hampering ductility. In contrast, higher cooling rate results a more uniform local strain distribution with finer MA structures, and higher ductility. Numerical simulation confirmed vi the detrimental effect of coarser MA is associated with higher local stress concentrations compared to finer MA In third stage of this research, an optimum heat treating cycle or tempering cycle (300°C,10 min) is developed to decompose detrimental coarser MA (≥1μm) microconstituents in which the difference in hardness between MA and ferrite is reduced. In addition, a tempering cycle reduces the stress concentration around MA. Applying a tempering cycle to GMAW improves tensile strength and ductility by the shifting fracture location from the HAZ to base metal during transverse tensile testing. Finally, varying cooling rates are used to investigate the influence of MA microconstituent on the mechanical properties after intercritical reheating, in which a higher fraction of coarse MA grains will severely deteriorate toughness. It is shown that MA deteriorates toughness by facilitating debonding, cracking and crack initiation during impact testing.