Privatizing Security, Securitizing Policing: The Case of the G20 in Toronto, Canada 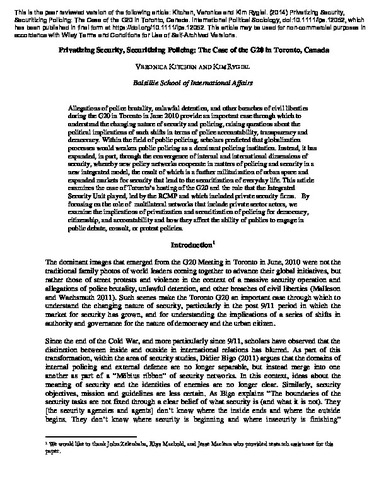 Allegations of police brutality, unlawful detention, and other breaches of civil liberties during the G20 in Toronto in June 2010 provide an important case through which to understand the changing nature of security and policing, raising questions about the political implications of such shifts in terms of police accountability, transparency, and democracy. Within the field of public policing, scholars predicted that globalization processes would weaken public policing as a dominant policing institution. Instead, it has expanded, in part, through the convergence of internal and international dimensions of security, whereby new policy networks cooperate in matters of policing and security in a new integrated model, the result of which is a further militarization of urban space and expanded markets for security, leading to the securitization of everyday life. This article examines the case of Toronto's hosting of the G20 and the role that the Integrated Security Unit—led by the RCMP and including private security firms—played. By focusing on the role of multilateral networks that include private sector actors, we examine the implications of the privatization and securitization of policing for democracy, citizenship, and accountability, looking at how they affect the ability of publics to engage in public debate, to consult, or to protest policies.