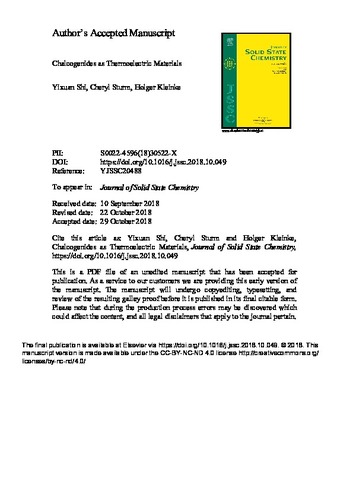 Thermoelectric materials can be utilized to generate electricity from a temperature gradient, thereby recycling the nowadays abundant waste heat, as well as for cooling applications by creating a temperature gradient from electricity. The former is based on the Seebeck effect, and the latter on the Peltier effect. Noticing the continuously declining fossil fuel resources and mankind's increasing need for energy, the importance for clean thermoelectric energy generation continues to climb. Traditional thermoelectric materials were based on the binary tellurides Bi2Te3 and PbTe, which have been utilized for decades. The focus on tellurium as the heaviest non-radioactive chalcogen stems from the observation that heavier elements are advantageous for a reduced thermal conductivity, which is essential for the thermoelectric energy conversion. Moreover, tellurides are less ionic than sulfides or selenides, which leads to an enhanced carrier mobility that is advantageous for the desired high electrical conductivity. This review presents these traditional routes to low thermal conductivity, as well as alternatives based on the lighter analogues of tellurium, namely sulfur and selenium.