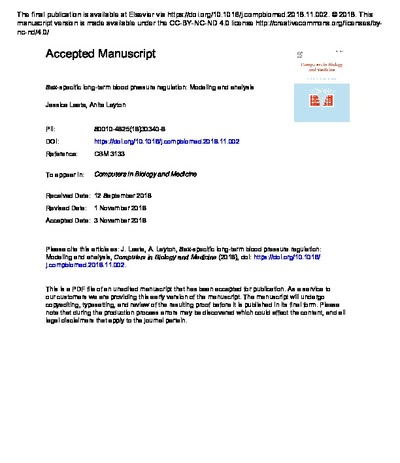 Hypertension is a global health challenge: it affects one billion people worldwide and is estimated to account for 60% of all cases or types of cardiovascular disease. In part because sex differences in blood pressure regulation mechanisms are not sufficiently well understood, fewer hypertensive women achieve blood pressure control compared to men, even though compliance and treatment rates are generally higher in women. Thus, the objective of this study is to identify which factors contribute to the sexual dimorphism in response to anti-hypertensive therapies targeting the renin angiotensin system (RAS). To accomplish that goal, we develop sex-specific blood pressure regulation models. Sex differences in the RAS, baseline adosterone level, and the reactivity of renal sympathetic nervous activity (RSNA) are represented. A novel aspect of the model is the representation of sex-specific vasodilatory effect of the bound angiotensin II type two receptor (AT2R-bound Ang II) on renal vascular resistance. Model simulations suggest that sex differences in RSNA are the largest cause of female resistance to developing hypertension due to the direct influence of RSNA on afferent arteriole resistance. Furthermore, the model predicts that the sex-specific vasodilatory effects of AT2R-bound Ang II on renal vascular resistance may explain the higher effectiveness of angiotensin receptor blockers in treating hypertensive women (but not men), compared to angiotensin converting enzyme inhibitors.