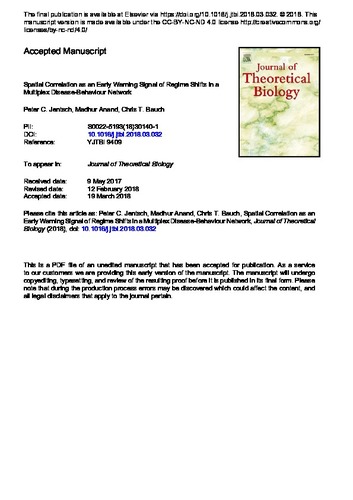 Early warning signals of sudden regime shifts are a widely studied phenomenon for their ability to quantify a system’s proximity to a tipping point to a new and contrasting dynamical regime. However, this effect has been little studied in the context of the complex interactions between disease dynamics and vaccinating behaviour. Our objective was to determine whether critical slowing down (CSD) occurs in a multiplex network that captures opinion propagation on one network layer and disease spread on a second network layer. We parameterized a network simulation model to represent a hypothetical self-limiting, acute, vaccine-preventable infection with short-lived natural immunity. We tested five different network types: random, lattice, small-world, scale-free, and an empirically derived network. For the first four network types, the model exhibits a regime shift as perceived vaccine risk moves beyond a tipping point from full vaccine acceptance and disease elimination to full vaccine refusal and disease endemicity. This regime shift is preceded by an increase in the spatial correlation in non-vaccinator opinions beginning well before the bifurcation point, indicating CSD. The early warning signals occur across a wide range of parameter values. However, the more gradual transition exhibited in the empirically-derived network underscores the need for further research before it can be determined whether trends in spatial correlation in real-world social networks represent critical slowing down. The potential upside of having this monitoring ability suggests that this is a worthwhile area for further research.