Evaluation and Value Management in Science 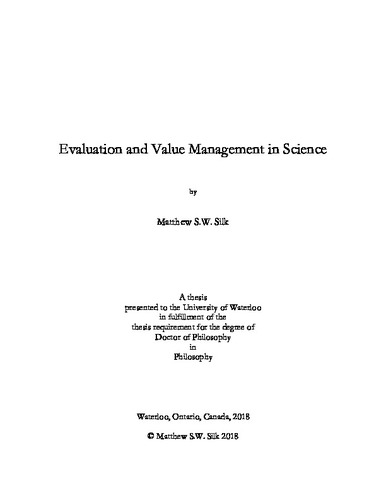 The nature of values has been an ongoing topic of discussion in philosophy, particularly in ethics. However, as the issue of how values should play a role in science has become more prominent, the discussion has not always paid due emphasis on clarifying the nature of values as perhaps it should have been. With the rise of arguments against the value-free ideal there has been an emergence of multiple accounts which aim to explain how values can be used in science while maintaining scientific integrity. I term these complex of approaches “value management.” Value management as a normative idea stems from the notion that somehow values represent some kind of threat to the integrity of science, even if how exactly they present a threat is not clear. What values are, and how they are problematic isn’t always explicit and there is no obvious definition of the term that is shared by philosophers of science. Competing visions of what values should play a role in science, and how they should play a role, may lack justification or be talking past one another if they do not share the same concept of value. To address this, I argue that there needs to be a more precise articulation of what values are, and that once we develop a nuanced account of value, many of the concerns that value management accounts respond to change or disappear. Looking to some historical and modern discussions of values and valuation, I show that there are accounts of value that are compatible with scientific thinking as judgments of practice which emphasize problem-solving and the relationship between events rather than reducing to mere desire. I argue that once we focus on values as verifiable judgments of practice, they are actually a source of scientific integrity and that our attention should focus on how values are experimentally formed through the process of inquiry. My analysis reveals that science is a complex and highly developed form of value judgment and that consideration of what makes value judgments successful is the key to ensuring that science can maintain integrity despite the use of various scientific, ethical, and social factors playing a role in the outcome of a scientific judgment.