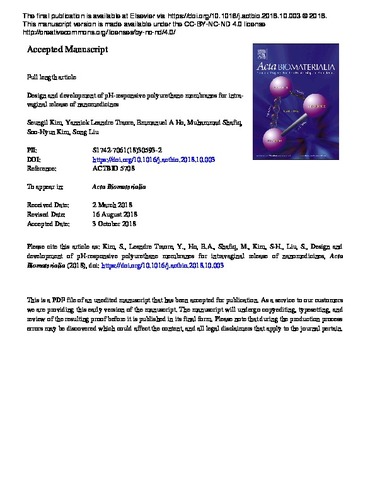 The objective of this study was to develop and characterize a novel intravaginal membrane platform for pH-triggered release of nanoparticles (NPs), which is essential for efficient intravaginal delivery of certain effective but acid-labile therapeutic agents for sexually transmitted infections, such as small interfering RNA (siRNA). A pH-responsive polyurethane (PU) was electrospun into a porous nanofibrous membrane. The diameters of the fibers, as well as the thickness and pore sizes of the membrane under dry and wet conditions (pH 4.5 and 7.0), were determined from scanning electron microscopy (SEM) micrographs. pH-dependent zeta-potential (_) of the membrane was evaluated using a SurPASS electrokinetic analyzer. Visiblex� color-dyed polystyrene NPs (PSNs, 200_nm, COOH) and CCR5 siRNA-encapsulated solid lipid NPs (SLNs) were used for in vitro NP release studies in a vaginal fluid simulant (VFS) at pH 4.5 (normal physiological vaginal pH) and 7.0 (vaginal pH neutralization by semen). During 24_h of incubation in VFS, close-to-zero PSNs (2_�_1%) and 28_�_4% SLNs were released through the PU membrane at pH 4.5, whereas the release of PSNs and SLNs significantly increased to 60_�_6% and 59_�_8% at pH 7.0, respectively. The pH-responsive release of NPs hinged on the electrostatic interaction between the pH-responsive membrane and the anionic NPs, and the change in pH-responsive morphology of the membrane. In vitro biocompatibility studies of the membrane showed no significant cytotoxicity to VK2/E6E7 human epithelial cells and Sup-T1 human T-cells and no significant changes in the expression of pro-inflammatory cytokines (IL-6, IL-8, and IL-1_). Overall, the porous pH-responsive PU membrane demonstrated its potential in serving as a �window� membrane in reservoir-type intravaginal rings (IVRs) for pH-responsive intravaginal release of NPs. Statement of Significance Stimuli-responsive intravaginal nanoparticle release is achieved for the first time through a new electrospun pH-responsive polyurethane (PU) semi-permeable membrane, which can serve as a �window� membrane in the reservoir-type IVR for the prevention of human immunodeficiency virus (HIV) transmission. Almost no release of nanoparticles was observed at normal pH in the female genital tract (in vaginal fluid simulant [VFS], at pH 4.5); however, a continuous release of NPs was observed at elevated pH in the female genital tract (in VFS, at pH 7.0). This pH-responsive intravaginal release can reduce side effect and drug resistance by avoiding unnecessary exposure. The PU semi-permeable membrane demonstrated potential use as biomaterials for �smart� intravaginal nanoparticle release and has great potential to protect women from HIV.