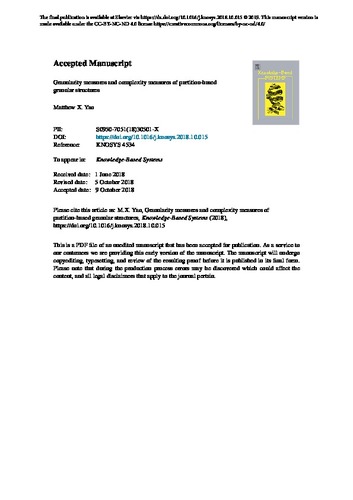 Granular computing is an emerging field of study in which the complexity of problem solving is reduced through granulation. Researchers have proposed various granularity measures of partitions to quantify the effects of granulation with respect to simplification. However, two important issues still remain and require careful investigation. The first issue is that a partition is only a simple two-level granular structure, which may not be sufficient for the full scope of granular computing. The second issue is a clarification of the differences between granularity and complexity. Although they are related to each other, they represent different things. To address the two issues, this paper makes three contributions. First, we extend the partition granulation scheme into multilevel granular structures based on progressive partitioning. Second, we propose a complexity measure of a partition that incorporates both the block-level interactions (interactions within a block) and the partition-level interactions (interactions between blocks of the partition). Third, we generalize the complexity measure to multilevel granular structures generated from a progressive partitioning process.