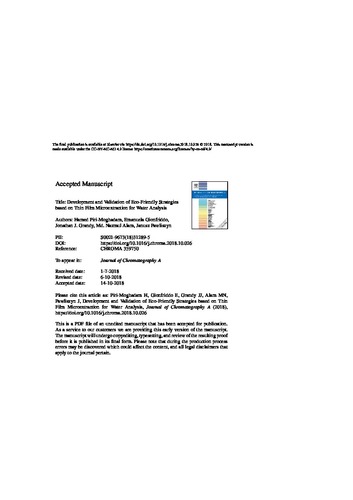 The aim of the current study is the establishment of Green Analytical Chemistry strategies for water analysis by elimination/reduction of hazardous chemicals, energy consumption, and waste generation throughout the entire analytical workflow. The first approach introduced in this manuscript consists of addition of water to a sampling vessel that contains a thin film microextraction (TFME) device, followed by removal of the device after equilibration, and subsequent quantification of the extracted components by thermal desorption GC/MS. In this approach, namely the in-bottle TFME approach, analyte-loss associated errors that stem from analyte adherence to glass surfaces and/or degradation are avoided as extraction occurs in situ, while analytes are isolated from a complex matrix that contains degradation agents (bacteria, oxidizing or reducing species, etc.). This procedure also circumvents the splitting of original samples into sub-samples. The second approach involves the use of portable TFME devices that facilitate on-site extraction of compounds, therefore eliminating the use of collection vessels, a factor known to potentially introduce errors into analysis. The herein described procedure involves attachment of the TFME device to drill accessories, analyte extraction via direct immersion into sampled site, and subsequent on-site instrumental analysis, which is carried out with the use of a portable GC/MS containing an appropriate thermal desorption interface, or alternatively, by transferring the membrane to the laboratory for bench-top GC/MS analysis. To facilitate a better understanding of the processes governing the developed approaches, modeling by COMSOL Multiphysics® software was performed. The findings of this study were applied for further method optimization, and the optimized developed methods were then applied for on-site surface water analyses. Finally, the greenness of the developed methods was evaluated with use of the eco-scale assessment, with obtained scores compared to that of the US EPA 8270 method.