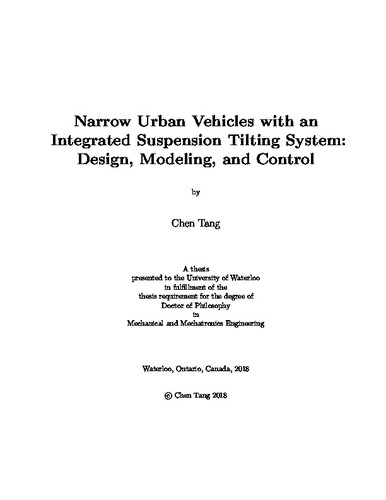 Narrow urban vehicles are proposed to alleviate urban transportation challenges like congestion, parking, fuel consumption, and pollution. They are designed to seat one or two people in tandem, which saves space in road infrastructures as well as improves the fuel efficiency. However, to overcome the high rollover tendency which comes as a consequence of reduced track-width ratio, tilting systems for vehicle roll motion control are suggested. Existing tilting solutions, which mechanically connect the wheel modules on both sides for motion synchronization, are not space-friendly for the narrow vehicle footprint. The mechanical linkages also add extra weight to those urban vehicles initially designed to be light-weighted. A novel integrated suspension tilting system (ISTS) is proposed in this thesis, which replaces rigid mechanical linkages with flexible hydraulic pipes and cylinders. In addition, combining the suspension and tilting into an integrated system will result in even more compact, light-weighted, and spacious urban vehicles. The concept is examined, and the suspension mechanism for the tilting application is proposed after examining various mechanisms for their complexity and space requirements. Kinematic and dynamic properties of the tilting vehicle under large suspension strokes are analyzed to optimize the mechanism design. Control of the active tilting systems for vehicle roll stability improvement is then discussed. Rather than tilting the vehicle to entirely eliminate the lateral load transfer during cornering, an integrated envelope approach considering both lateral and roll motion is proposed to improve the energy efficiency while maintaining the vehicle stability. A re-configurable integrated control structure is also developed for various vehicle configurations as well as enhancing the system robustness against actuator failures. The model predictive control (MPC) scheme is adopted considering the non-minimum phase nature of active tilting systems. The predictive feature along with the proposed roll envelope formulation provides a framework to balance the transient and steady-state performances using the tilting actuators. The suggested controller is firstly demonstrated on a vehicle roll model, and then applied to high-fidelity full vehicle models in CarSim including a four-wheeled SUV as well as a three-wheeled narrow urban vehicle. The SUV simulation results indicate the potential of using the developed envelope controller on conventional vehicles with active suspensions, while the narrow urban vehicle simulations demonstrate the feasibility of using the suggested ISTS on narrow tilting vehicles. By adopting the integrated envelope control approach, actuation effort is reduced and the vehicle handling, along with the stability in both lateral and roll, can be further improved.