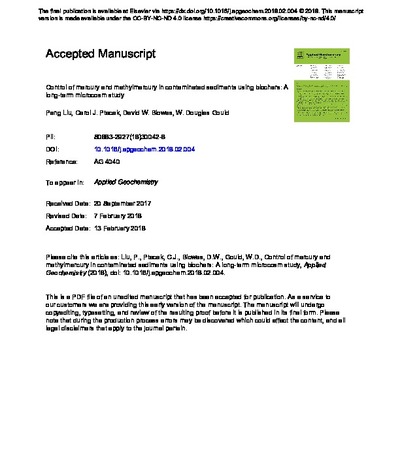 The effectiveness of activated carbon and four types of biochar, switchgrass (300 °C and 600 °C), poultry manure (600 °C), and oak (∼700 °C) with respect to mercury (Hg) and methylmercury (MeHg) control was assessed in microcosm experiments carried out for 524 d. Early in the study (<30 d), minimal differences in concentrations of <0.45-μm filtered total Hg (THg) in control and 5% biochar-amended systems were observed. At later stages, THg concentrations in the amended systems decreased to 8–80% of concentrations in the sediment controls. Aqueous concentrations of MeHg were generally lower in the amended systems than in the controls, with an initial peak in MeHg concentration corresponding to the onset of iron and sulfate reduction (∼40 d) and a second peak to methanogenic conditions (∼400 d). Pyrosequencing analyses indicate the microbial communities initially associated with fermenters and later shifted to iron-reducing bacteria (FeRB), sulfate-reducing bacteria (SRB), and methanogens. These analyses also indicate the existence of 12 organisms associated with Hg methylation in all systems. Community shifts were correlated with changes in the concentrations of carbon sources (dissolved organic carbon (DOC) and organic acids) and electron acceptors (NO3−, Fe, and SO42−). Co-blending of biochars with Hg-contaminated sediment can be an alternative remediation method for controlling the release of Hg and MeHg, but the potential for Hg methylation under some conditions requires consideration.