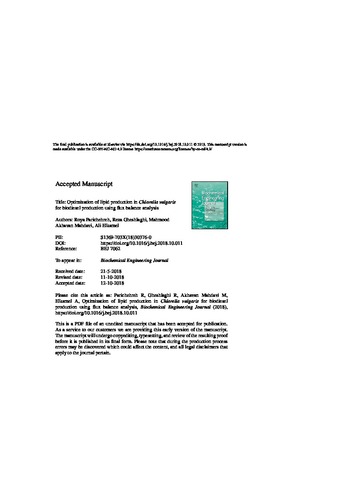 Microalgae, the world’s largest group of photosynthetic organisms, convert atmospheric CO2 to polar and neutral lipids using sunlight, which after esterification can be utilized for biodiesel production. In the present study, a fully compartmentalized metabolic network was developed to describe the metabolism of Chlorella vulgaris based on known enzymatic reactions and typical metabolic pathways of green algae. Flux balance analysis was employed to optimize the speciﬁc growth rate and the lipid production rate using measured exchange ﬂuxes of the metabolites. The experimental data for batch and fed batch algal fermentation systems acquired from the literature were used to validate the accuracy of the pseudo- steady state model. The physiological pathways of the microalgae for lipid biosynthesis were identified. The simulation revealed that the microalgae would be able to produce higher levels of lipid content (43.6%) during N-starvation cultivation under 100 μmol m−2 s−1 light intensity, 0.25 vvm aeration with 2% (v/v) CO2, 2 mg L−1 PO4-P, and 5 mg L−1 NO3-N. Sensitivity analysis showed that CO2, light energy, O2, and nitrate were the most important factors affecting the lipid production at N-deficient conditions. The findings consequential for manipulation of the metabolism of the microalgae with optimal activity.