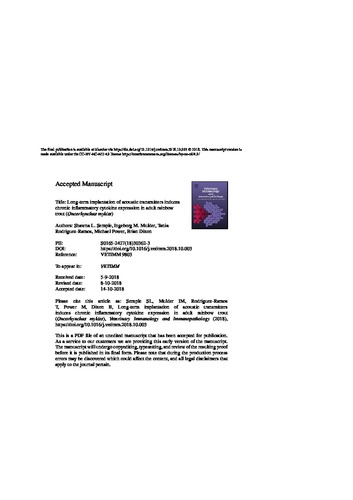 Telemetry transmitters are frequently used in studies of wild fish migration and behavior. Although the effects of surgically implanted transmitters on survival, tag retention, healing and growth have been studied, there has been little research regarding the potential immune response induced by these transmitters. In the current study, mature rainbow trout received either surgical implantation of an acoustic transmitter or a sham surgical procedure. These fish were then sampled over a 10-week period so that pro-inflammatory cytokine expression in the spleen, peritoneal cavity lymphocytes and muscle at the surgical site could be analyzed. There were no significant differences in transcript expression for the spleen and muscle tissue between fish that had a transmitter and those that received the surgical procedure alone. However, transmitter presence significantly increased the expression of IL-6, IL-1β and TNFα in the peritoneal cells at 10 weeks indicating that tagged fish may be coping with chronic inflammation. Furthermore, tagged male fish had a higher inflammatory response in 10-week peritoneal lavage samples when compared to their tagged mature female counterparts, providing some evidence that mature female rainbow trout may have suppressed immune function when sexually mature. Externally, fish appeared to heal at similar rates regardless of the presence or absence of the transmitter, but the tag itself was prone to encapsulation and adhesion to the body wall and/or surgical site. This suggests that fish tagged with large intraperitoneal implants may not behave similarly to their wild counterparts. This research could aid in the development of improved telemetry tags that are more biocompatible, economical and better able to track fish behavior/movement.