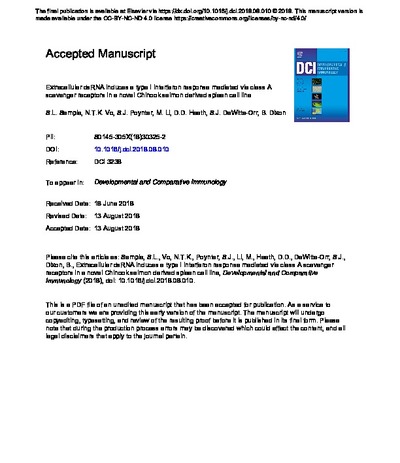 Despite increased global interest in Chinook salmon aquaculture, little is known of their viral immune defenses. This study describes the establishment and characterization of a continuous cell line derived from Chinook salmon spleen, CHSS, and its use in innate immune studies. Optimal growth was seen at 14–18 °C when grown in Leibovitz's L-15 media with 20% fetal bovine serum. DNA analyses confirmed that CHSS was Chinook salmon and genetically different from the only other available Chinook salmon cell line, CHSE-214. Unlike CHSE-214, CHSS could bind extracellular dsRNA, resulting in the rapid and robust expression of antiviral genes. Receptor/ligand blocking assays confirmed that class A scavenger receptors (SR-A) facilitated dsRNA binding and subsequent gene expression. Although both cell lines expressed three SR-A genes: SCARA3, SCARA4, and SCARA5, only CHSS appeared to have functional cell-surface SR-As for dsRNA. Collectively, CHSS is an excellent cell model to study dsRNA-mediated innate immunity in Chinook salmon.