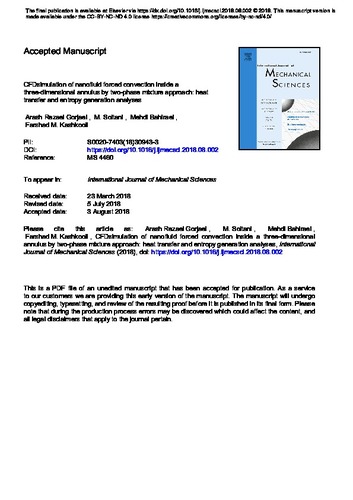 The behavior of water–Al2O3 nanofluid inside the three-dimensional horizontal concentric annulus is investigated by the two-phase mixture procedure regarding the first and second laws of thermodynamics. The annulus walls are subjected to constant temperature boundary condition. Heat transfer and entropy generation rates, nanoparticle distribution, skin friction coefficient, and temperature distribution are evaluated at different concentrations and Reynolds numbers. The results show that nanoparticle concentration at the bottom of annulus and the upper side of inner cylinder is greater than other regions. In addition, the heat transfer and thermal entropy generation rates increase with increment of concentration and Reynolds number. Moreover, the lowest and highest thermal entropy generation rates happen in the annulus central part and near the walls, respectively. Bejan number is very close to 1 at all cases under study, which shows the dominance of thermal entropy generation.