Anisotropy in the quasi-static and cyclic behavior of ZK60 extrusion: Characterization and fatigue modeling 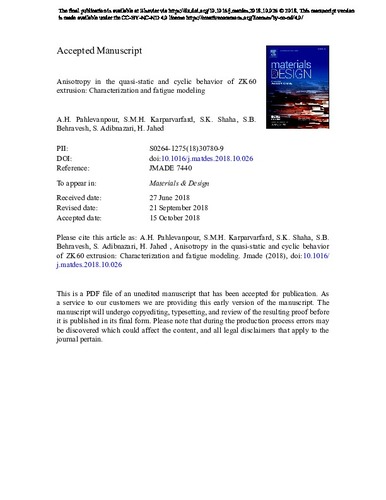 The quasi-static and strain-controlled fatigue characteristics of ZK60 extrusion have been investigated along three different directions: the extrusion direction (ED), the radial direction (RD), and 45° to the extrusion direction (45°). The quasi-static response showed symmetric behavior for the samples tested along RD and 45°, whereas the ED samples manifested completely asymmetric behavior. Although the ED samples exhibited longer fatigue lives than the RD and 45° in the high cycle fatigue, the fatigue lives in the low cycle fatigue regime were similar. The texture measurement indicated a sharp basal texture along ED, explaining its asymmetric behavior. Higher tensile mean stress and less dissipated plastic energy per cycle for the ED samples, acting as two competing factors, were the principal reasons for exhibiting fatigue responses identical to those of RD and 45° in the LCF regime. The fracture surface in the ED direction was dominated by twin lamellae and profuse twinned grains, whereas that in RD was dominated by slip bands. Finally, Smith-Watson-Topper and Jahed-Varvani models were employed to predict the fatigue lives along all directions using a single set of material parameters.