Dunhuang Tectonic Belt in northwestern China as a part of the Central Asian Orogenic Belt: Structural and U-Pb geochronological evidence 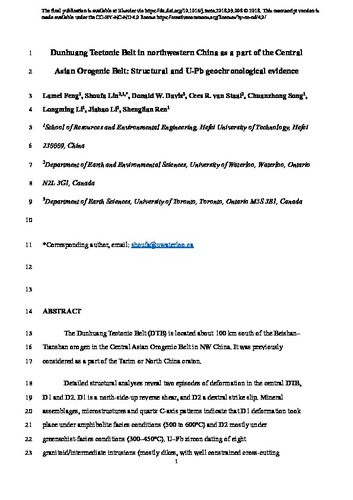 The Dunhuang Tectonic Belt (DTB) is located about 100 km south of the Beishan–Tianshan orogen in the Central Asian Orogenic Belt in NW China. It was previously considered as a part of the Tarim or North China craton. Detailed structural analyses reveal two episodes of deformation in the central DTB, D1 and D2. D1 is a north-side-up reverse shear, and D2 a dextral strike slip. Mineral assemblages, microstructures and quartz C-axis patterns indicate that D1 deformation took place under amphibolite facies conditions (500 to 600 °C) and D2 mostly under greenschist-facies conditions (300–450 °C). U–Pb zircon dating of eight granitoid/intermediate intrusions (mostly dikes, with well constrained cross-cutting relationships with the D1 and D2 structures) and an amphibolite gneiss indicates that D1 deformation took place before ca. 349 Ma and most likely at ca. 406 Ma, and D2 between ca. 249 Ma and ca. 241 Ma. The DTB has a structural, metamorphic and magmatic signature in the Paleozoic–Mesozoic that is typical of an orogenic belt. It shares a similar geological history with the Beishan–Tianshan orogen and is likely a part of the Central Asian Orogenic Belt. The DTB and the Beishan-Tianshan orogen might represent two separate Paleozoic mountain belts that developed more or less synchronously on the south and north sides, respectively, of the last vestige of the Paleo-Asian Ocean before its terminal closure in the Permian. The D1 reverse shearing in the DTB is interpreted to be related to a Silurian–Devonian terrane accretion/collision and the D2 dextral strike slip to post-accretional/collisional movement among terranes in Late Permian–Middle Triassic time.