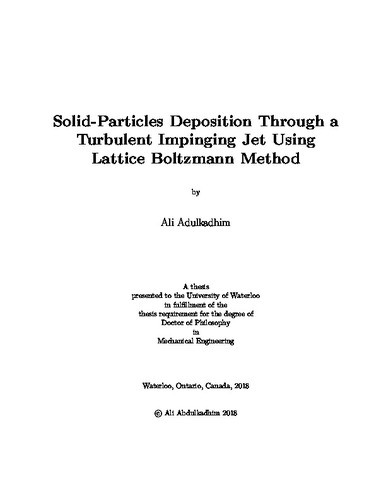 Solid particle distribution on an impingement surface has been simulated utilizing a graphical processing unit (GPU). An in-house computational fluid dynamics (CFD) code has been developed to investigate a 3D turbulent impinging jet using the lattice Boltzmann method (LBM) in conjunction with large eddy simulation (LES) and the multiple relaxation time (MRT) models. This work proposed an improvement in the LBM-cellular automata (LBM-CA) probabilistic method. In the current model, the fluid flow utilizes the D3Q19 LBM lattice model, while the particles movement employs the D3Q27 one. The particle numbers are defined at the same regular LBM (fluid) nodes, and the transport of particles from one node to its neighbouring nodes are determined in accordance with the particle bulk density and velocity by considering all the external forces. The previous CA models distribute particles at each time step without considering the local particles number and velocity at each node. The present model overcomes the deficiencies of the previous LBM-CA models and, therefore, can better capture the dynamic interaction between particles and the surrounding turbulent flow field. Despite increasing popularity of the LBM-MRT model in simulating complex multiphase fluid flows, this approach is still expensive in term of memory size and computational time required to perform 3D simulations. To improve the throughput of simulations, a single GeForce GTX TITAN X GPU is used in the present work. The CUDA parallel programming platform and the CuRAND library are utilized to form an efficient LBM-MRT-CA algorithm. The LBM-MRT fluid (i.e. no particles) model results were compared with two benchmark test cases ones. The first case is a turbulent free square jet, and the second one is a circular turbulent impinging jet for L/D=2 at Reynolds number equals to 25,000, where L is the nozzle-to-surface distance and D is the jet diameter. The LBM-CA simulation methodology was first validated against a benchmark test case involving particle deposition on a square cylinder confined in a duct. The flow was unsteady and laminar at Re=200 (Re is the Reynolds number), and simulations were conducted for different Stokes numbers. The GPU code was then used to simulate the particle transport and deposition in a turbulent impinging jet at Re=10,000. The effect of changing Stokes number on the particle deposition profile was studied at different L/D ratios, i.e. L/D=2, 4, and 6. The current model was finally used to simulate the particle impaction pattern from a circular jet for L/D=0.5, where the effect of changing Stokes and Reynolds numbers on the particle transport and deposition was examined. The present LBM-CA solutions agree well with other results available in the open literature. For comparative studies, another in-house serial CPU code was also developed, coupling LBM with the classical Lagrangian particle dispersion model. Agreement between results obtained with LBM-CA and LBM-Lagrangian models and the experimental data for the impinging jet case of L/D=0.5 is generally good, and the present LBM-CA approach on GPU achieves a speedup ratio of about 150 against the serial code running on a single CPU. Another new model was proposed to incorporate the solid particle phase effect (i.e. two-way coupling) on the fluid flow. The LMB-Lagrangian approach was used in this model to track solid particles in the computational domain. The solid particle phase was considered as a porous medium moving in the computational domain. The impact of the porous medium (i.e. the solid particle phase) on the fluid flow characteristics (e.g. fluid velocity) is a function of the particle phase volume fraction and velocity in the LBM. Particle-particle collision (i.e. four-way coupling) was also considered in this model by utilizing the discrete element method (DEM). This approach can numerically capture the multi-particle collision behaviours in dense particle suspension problems. This model data were compared with the numerical study ones for a single bubble injected in a fluidized bed, and the results of the bubble diameters at different injection velocity were in good agreement.