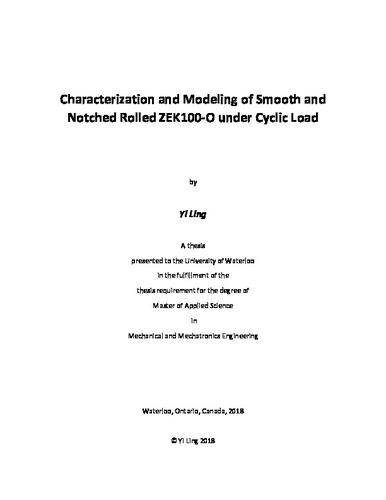 As an effective way to reduce greenhouse gas emissions, goals on weight reduction has been fully focused by automotive manufacturers to meet the environmental regulations. Magnesium (Mg) alloys, with its high specific strength and low density, are particularly attractive to applications where light-weight is a part of its objective. However, Magnesium alloy with its unique crystallographic structure (Hexagonal Close Packing) provides different deformation mechanisms in contrast to steel or Aluminum alloys are currently been used for load-bearing components which have to be studied. As fatigue failure is a major concern, this thesis aims to characterize the stress-strain response as well as fatigue properties of ZEK100-O rolled sheet and to model the stress-strain responses and fatigue properties at the notch root where the crack is most likely to initiate due to the stress concentration when a notch is present. Initially, the cyclic behavior of rolled ZEK100-O Magnesium alloy sheet has been investigated by performing fully-reversed and strain-controlled tension-compression tests with the strain amplitude span from 0.3% to 2.3% on the smooth specimen and load-controlled cyclic tests on notched specimens. In addition, the fatigue properties of the material are also investigated by fitting the fatigue test results to the Smith-Watson-Topper (SWT) and Jahed-Varvani energy models. Next, the phenomenological stress-strain model for asymmetric materials proposed by Dallmeier has been implemented using the fully-reversed and strain-controlled tension-compression test results on ZEK100-O and results available on AZ31B-H24 which have shown good agreement. A MATLAB code has been written to obtain all the necessary material parameters from one single hysteresis which has visible twin exhaustion and further investigation shown that a stress-strain hysteresis with strain amplitude of 2% is sufficient. With an additional cyclic stress-strain curve (CSSC) input, the MATLAB code is capable of predicting the stress-strain responses for a given strain history. Furthermore, the cyclic behavior and fatigue properties of rolled ZEK100-O and AZ31B-H24 Magnesium alloy notched sample has been investigated by performing fully-reversed load-controlled tension and compression tests. To induce sufficient amount of plasticity yet to prevent general yielding at the notch root, the applied nominal load has been chosen based on its compressive yield stress, which is lower in contrast to its tensile yield stress. Given an elastic stress concentration factor of 2.5 at the notch root based on the test sample geometry, four different nominal stress levels (50%, 60%, 70% and 80% of compressive yield stress equivalent load) were chosen. The strain field around the notch root during the cyclic loading has been captured using the digital image correlation (DIC) technique. In addition, the crack initiation and propagation have also been captured simultaneously using DIC for its fatigue properties. The strain predictions at the notch root at the end of each loading segment using both Neuber’s and Glinka’s rule have been examined on both ZEK100-O and AZ31B-H24 based on the strain measurements at the notch root. It has been found that the strain predictions are reasonably close to the experimentally obtained value for both Neuber’s and Glinka’s rule. However, the strain prediction using Neuber’s rule tend to give a larger value in contrast to Glinka’s rule, which is more conservative as long as life prediction is concerned. At the same time, the effects of the stress state at the notch root (plane stress or plane strain) to the axial strain measurements have also been studied by performing additional fully-reversed load-controlled tension and compression tests on notched samples with different thicknesses. Finally, upon the existing MATLAB code which is capable of predicting the stress-strain responses for a given strain history, notch analysis based on Neuber’s and Glinka’s methods have been integrated by applying either Neuber’s or Glinka’s rule upon the stress-strain curve generated using Dallmeier’s model for each reversal. Additionally, the plane strain correction has been used to obtain the stress-strain responses at the notch root under plane strain condition from the plane stress solution. Having the stress-strain responses at the notch root, a modified SWT and Jahed-Varvani (J-V) energy model based on the uniaxial fully-reversed and strain-controlled tension-compression fatigue test results on smooth samples incorporate with Miner’s rule have been used to ultimately predict the life of a notch member providing its elastic stress concentration factor and nominal load history. The life predictions on the notch members under both constant and variable amplitude loads have been examined on ZEK100-O and AZ31B-H24 which yield good results.