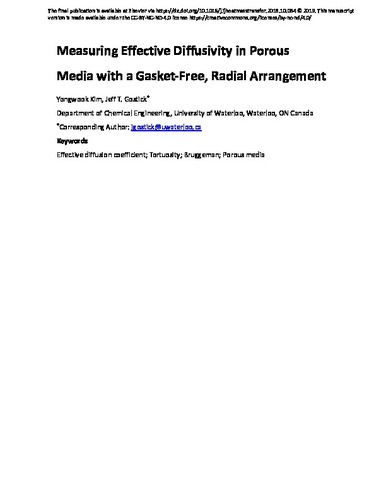 A simple technique for measuring the effective diffusivity, and ultimately tortuosity, in porous media is presented. The method uses a custom-built apparatus, based on a radial geometry, which eliminates the need for any gaskets to seal the edge of the sample. This makes it particularly well suited for thin media such as films and layers. The experiment is based on the transient response of the oxygen concentration at the center of the sample as oxygen diffuses into an initially nitrogen filled domain from the sample perimeter. The analytical solution of Fick’s law for transient diffusion in cylindrical coordinates is fitted to the measured oxygen concentration profile to obtain the effective diffusivity. To validate the method, binary diffusion coefficients of N2-Air system were measured and the results show a close match and are consistent for a range of experimental parameters like flow rate and domain thickness. The classical study of diffusion in porous media based on sphere packing is revisited for further validation of the technique. The results show good agreement to the well-known Bruggeman correlation as well as to the experimental values reported in the literature. The new technique is further applied to other types of thin porous materials and the results indicate that the Bruggeman correlation generally underestimates the effective diffusivity of non-sphere packing.