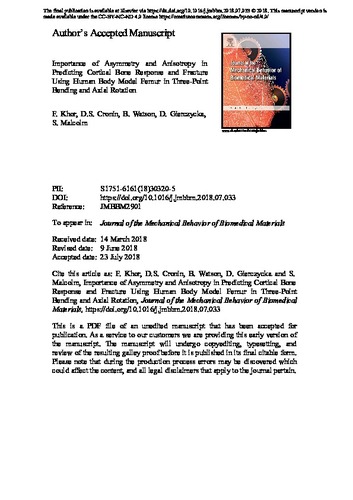 Modeling of cortical bone response and failure is critical for the prediction of Crash Induced Injuries (CII) using advanced finite element (FE) Human Body Models (HBM). Although cortical bone is anisotropic and asymmetric in tension and compression, current HBM often utilize simple isotropic, symmetric, elastic-plastic constitutive models. In this study, a 50th percentile male femur FE model was used to quantify the effect of asymmetry and anisotropy in three-point bending and axial torsion. A complete set of cortical bone mechanical properties was identified from a literature review, and the femur model was used to investigate the importance of material asymmetry and anisotropy on the failure load/moment, failure displacement/rotation and fracture pattern. All models were able to predict failure load in bending, since this was dominated by the cortical bone material tensile response. However, only the orthotropic model was able to predict the torsional response and failure moment. Only the orthotropic model predicted the fracture initiation location and fracture pattern in bending, and the fracture initiation location in torsion; however, the anticipated spiral fracture pattern was not predicted by the models for torsional loading. The results demonstrated that asymmetry did not significantly improve the prediction capability, and that orthotropic material model with the identified material properties was able to predict the kinetics and kinematics for both three-point bending and axial torsion. This will help to provide an improved method for modeling hard tissue response and failure in full HBM.