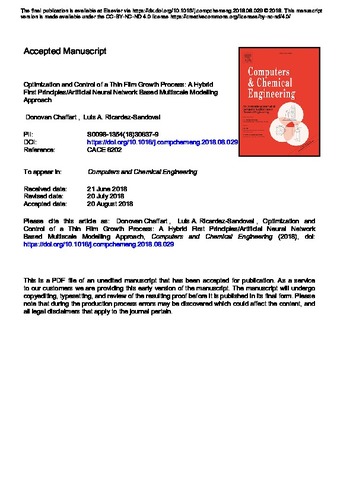 This work details the construction and evaluation of a low computational cost hybrid multiscale thin film deposition model that couples artificial neural networks (ANNs) with a mechanistic (first-principles) multiscale model. The multiscale model combines continuum differential equations, which describe the transport of the precursor gas phase, with a stochastic partial differential equation (SPDE) that predicts the evolution of the thin film surface. In order to allow the SPDE to accurately predict the thin film growth over a range of system parameters, an ANN is developed and trained to predict the values of the SPDE coefficients. The fully-assembled hybrid multiscale model is validated through comparison against a kinetic Monte Carlo-based thin film multiscale model. The model is subsequently applied to a series of optimization and control studies to test its performance under different scenarios. These studies illustrate the computational efficiency of the proposed hybrid multiscale model for optimization and control applications.