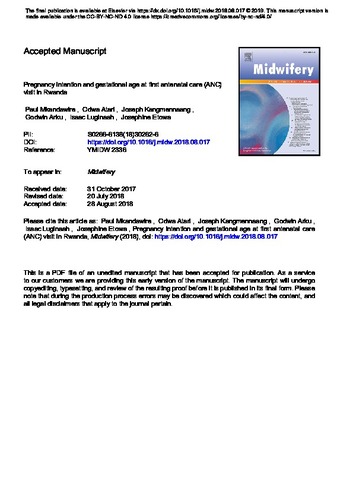 Background With antenatal care (ANC) coverage now widely seen as a success story in Sub-Sahara Africa (SSA), attention has begun to shift towards exploring the full life-saving potential that ANC holds. Objectives This study examines association between pregnancy intention and gestational age at first antenatal care (ANC) visit in Rwanda, where ANC coverage is nearly universal. Methods We use survival analysis and apply the lognormal model in Stata SE 15 to compute time ratios (TR) that provide a direct metric for time to first ANC check-up. Results Despite nearly universal coverage, only 25% of pregnant mothers start ANC within the timeframe recommended by WHO. Women with unintended pregnancies are even more likely to delay ANC (TR = 11.4%, Z = 2.48, p < 0.05) than women with intended pregnancies. The effect of pregnancy intention on time to first ANC accentuates when we control for parity in the hazard models. There is also educational divide, with early start of ANC limited to pregnant women with secondary education or higher. Interaction effects suggest significant interaction between parity (≥ 4) and unintended pregnancy (TR = 11.1%, Z = -2.07, p < 0.05) on gestational age at first ANC. Other predictors of time to first ANC are contact with health care provider and perceived barriers. Conclusion With near universal coverage, the next big challenge to harness the full life-saving potential of ANC in Rwanda would be ramping up prompt start of prenatal care, timeliness of successive checkup intervals, and adherence to recommended number of visits, as opposed to simply increasing attendance. Preventing unwanted pregnancies in multiparous mothers through family planning would also significantly to the goal of universal ANC coverage in Rwanda.