The Synthesis of 3-Vinylindolines by the Palladium-Catalyzed Intramolecular Allylic Alkylation of Cinnamyl Acetates and the Synthesis of Polyphenolic 4-Aryl-3,4-dihydrocoumarins by Domino Friedel-Crafts Reactions 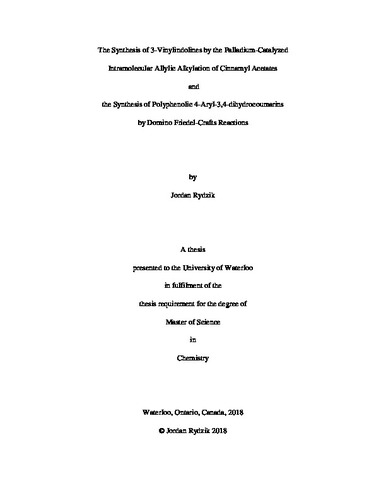 Historically, the alkylation of allylic acetates with non-stabilized C(sp3) nucleophiles has been challenging. The metal-catalyzed alkylation of allylic acetates and carbonates with organotin and organoboron reagents has significantly increased the scope of nucleophiles available to participate in such reactions; however, the generation of C(sp3)-C(sp3) bonds in this manner remains difficult. We therefore designed a substrate in order to explore the intramolecular transition metal-catalyzed alkylation of an allylic acetate with a C(sp3) organotin nucleophile. From this substrate we were able to successfully synthesize a number of 3-vinylindolines in modest to good yields in as little as seven steps through the palladium-catalyzed intramolecular allylic alkylation of cinnamyl acetates with tethered organotin nucleophiles. To the best of our knowledge this represents the first example of such a transformation, resulting in the formation of novel C(sp3)-C(sp3) bonds. It has been shown that polyphenolic procyandins, members of the flavonoid class of compounds, possess moderate affinity for a synthetic model of a proline rich region of the microtubule associated protein tau. The phosphorylation of this region of tau is thought to be correlated with the development of intraneuronal protein deposits, a hallmark of Alzheimer’s disease physiopathology. In the second part of this thesis, we set out to utilize the domino Friedel-Crafts alkylation/acylation of benzylidene Meldrum’s acids with phenols previously developed in our group for the synthesis of a number of polyphenolic 4-aryl-3,4-dihydrocoumarins, members of the neoflavonoid class of compounds. By synthesizing a library of polyphenolic neoflavonoids in this manner, which possessed variation in the number and position of hydroxyl groups about the aromatic rings, a systematic survey of the structure-activity relationship was to be conducted. This would allow us gain a better understanding of potential therapeutic agents that may be able to attenuate the formation of these intraneuronal protein deposits in the treatment of Alzheimer’s disease.

Jordan Rydzik (2018). The Synthesis of 3-Vinylindolines by the Palladium-Catalyzed Intramolecular Allylic Alkylation of Cinnamyl Acetates and the Synthesis of Polyphenolic 4-Aryl-3,4-dihydrocoumarins by Domino Friedel-Crafts Reactions. UWSpace. http://hdl.handle.net/10012/14059