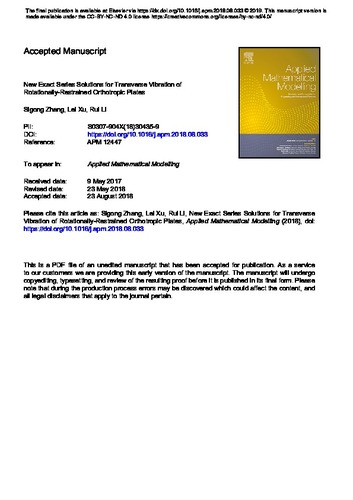 The exact series solutions of plates with general boundary conditions have been derived by using various methods such as Fourier series expansion, improved Fourier series method, improved superposition method and finite integral transform method. Although the procedures of the methods are different, they are all Fourier-series based analytical methods. In present study, the foregoing analytical methods are reviewed first. Then, an exact series solution of vibration of orthotropic thin plate with rotationally restrained edges is obtained by applying the method of finite integral transform. Although the method of finite integral transform has been applied for vibration analysis of orthotropic plates, the existing formulation requires of solving a highly non-linear equation and the accuracy of the corresponding numerical results can be questionable. For that reason, an alternative formulation was proposed to resolve the issue. The accuracy and convergence of the proposed method were studied by comparing the results with other exact solutions as well as approximate solutions. Discussions were made for the application of the method of finite integral transform for vibration analysis of orthotropic thin plates.