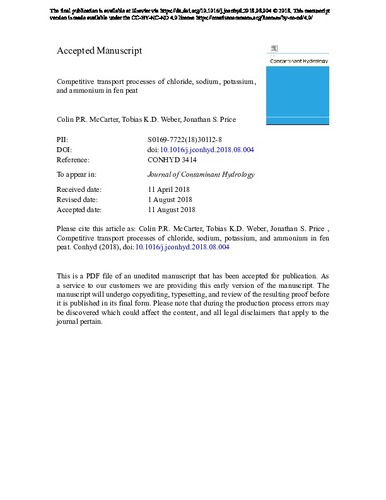 There is sparse information on reactive solute transport in peat; yet, with increasing development of peatland dominated landscapes, purposeful and accidental contaminant releases will occur, so it is important to assess their mobility. Previous experiments with peat have only evaluated single-component solutions, such that no information exists on solute transport of potentially competitively adsorbing ions to the peat matrix. Additionally, recent studies suggest chloride (Cl-) might not be conservative in peat, as assumed by many past peat solute transport studies. Based on measured and modelled adsorption isotherms, this study illustrates concentration dependent adsorption of Cl- to peat occurred in equilibrium adsorption batch (EAB) experiments, which could be described with a Sips isotherm. However, Cl- adsorption was insignificant for low concentrations (<500 mg L−1) as used in breakthrough curve experiments (BTC). We found that competitive adsorption of Na+, K+, and NH4+ transport could be observed in EAB and BTC, depending on the dissolved ion species present. Na+ followed a Langmuir isotherm, K+ a linear isotherm within the tested concentration range (~10 – 1500 mg L−1), while the results for NH4+ are inconclusive due to potential microbial degradation. Only Na+ showed clear evidence of competitive behaviour, with an order of magnitude decrease in maximum adsorption capacity in the presence of NH4+ (0.22 to 0.02 mol kg-1), which was confirmed by the BTC data where the Na+ retardation coefficient differed between the experiments with different cations. Thus, solute mobility in peatlands is affected by competitive adsorption.