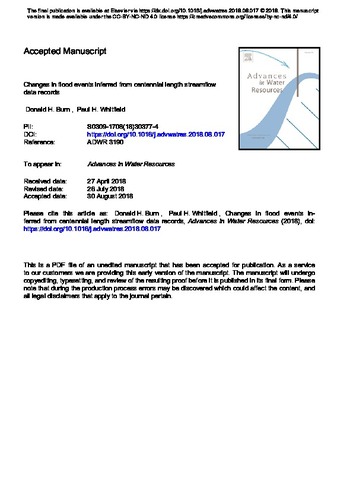 This research examines ways that climate change may alter the risk of flooding in cold regions focusing on changes in the flood regimes and changes and shifts in the dominant flood generating processes at 27 natural watersheds across Canada and the northern United States. Changes in flood regimes are examined using data from long term hydrometric reference streamflow gauging stations whose data record spans the past 100 years; stations included are considered to have good quality data and were screened to avoid the influences of regulation, diversions, or land use change. Changes in flood regimes are complex and require different approaches to properly characterize the variety of changes that have occurred and are likely to occur in the future. Peaks over threshold data are used to explore changes to the magnitude, timing, volume and duration of threshold exceedences. Circular statistics are used to explore changes in the nature of the flood regime based on changes in the timing and regularity of flood threshold exceedences. All flood regimes show an increased number of threshold exceeding events. An increased prevalence of rainfall flood responses is observed as flood events occur more often during the rainfall dominated portion of the seasonal cycle resulting in a shift for nival regime stations to a more mixed regime and for mixed regime stations towards a more pluvial regime. The results support viewing hydrologic regime as a continuum from nival to pluvial with several stations shifting towards the pluvial end.