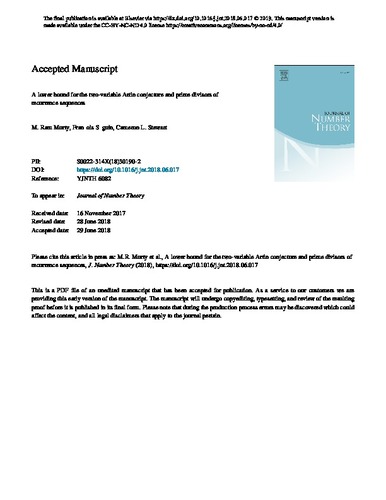 In 1927, Artin conjectured that any integer other than −1 or a perfect square generates the multiplicative group (Z/pZ)× for infinitely many p. In 2000, Moree and Stevenhagen considered a two-variable version of this problem, and proved a positive density result conditionally to the generalized Riemann Hypothesis by adapting a proof by Hooley for the original conjecture. In this article, we prove an unconditional lower bound for this two-variable problem. In particular, we prove an estimate for the number of distinct primes which divide one of the first N terms of a non-degenerate binary recurrence sequence. We also prove a weaker version of the same theorem, and give three proofs that we consider to be of independent interest. The first proof uses a transcendence result of Stewart, the second uses a theorem of Bombieri and Schmidt on Thue equations and the third uses Mumford's gap principle for counting points on curves by their height. We finally prove a disjunction theorem, where we consider the set of primes satisfying either our two-variable condition or the original condition of Artin's conjecture. We give an unconditional lower bound for the number of such primes.