Evaluating the Effects of a Fire Disturbance on Native Alvar Vegetation: Implications for Woody Species Management and Conservation of Open Alvar Habitat 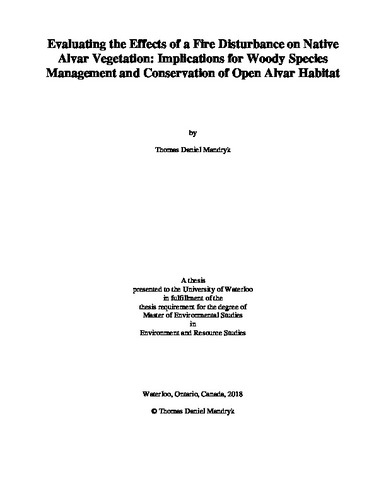 The decline and loss of certain habitat types can be attributed in some part due to a change of disturbance mechanisms or fire exclusion. This is of particular concern for globally-rare open alvar community types, and the restricted, specialist, and rare species found only on alvar habitats. North Bear Alvar, a parcel of alvar in the Carden Alvar located in the Kawartha Lakes region in Ontario, represents a system that, due to anthropogenic influences and habitat degradation, has been encroached by problematic woody species which have changed the structure, composition, and function of the open alvar. This has resulted in an increase in woody percent cover and a decrease in native herbaceous species richness and cover, two characteristics to open alvar habitat community types. It is hypothesized that to some degree, alvars necessitate periodic fire disturbance to maintain open alvar habitat attributes. However, a lack of contemporary disturbance has led to a decrease in open alvar sizes on North Bear Alvar. A lack of fire disturbance research on certain alvars has left conservation managers without specific answers to post-disturbance habitat brought on by fire. Here, I aim to comparatively assess various conservation interventions representing forms of disturbance to determine which yield more desirable open habitat conditions following disturbance. Specifically, I address the questions 1) What are the differences in post-treatment vegetation compositions following treatment by prescribed burning, glyphosate application, and manual lopping? 2) How do each of these treatments contribute to facilitating nutrient availability and soil conditions with respect to NO3, P, and K? And 3) Can a mesocosm prescribed burn device (the ‘burn box’) replicate fire effects on a small 4 m2 scale? To determine this, I collected abundance, cover, and richness data on the plant community, and soil nutrient samples on 32 permanent plots on North Bear to assess change over the three treatment types in comparison to control plots. I analysed these data for significant differences between treatments and control plots using ANOVAs. I mapped fire severity and vegetation structure to determine the efficacy of the burn box device at informing conservation management using fire. Using these results, I found prescribed burning using the burn box resulted in significant increases (p <0.05) in the cover and abundance of native herbaceous species and significant decreases (p <0.05) in the cover of regenerating woody vegetation, though richness remained unchanged. In addition, using the burn box device, I found replicable fire effects and dynamics observed in non-confined prescribed burns, opening the utility of the burn box to testing fire effects on small scales before initiating prescribed burning in novel, exploratory, or uncertain conditions. In order to conserve open alvar habitat on North Bear Alvar, a habitat excluded from fire for over 100 years, I recommend prescribed burning 30% of the habitat to stimulate native biodiversity and reduce woody cover in early seral stages.