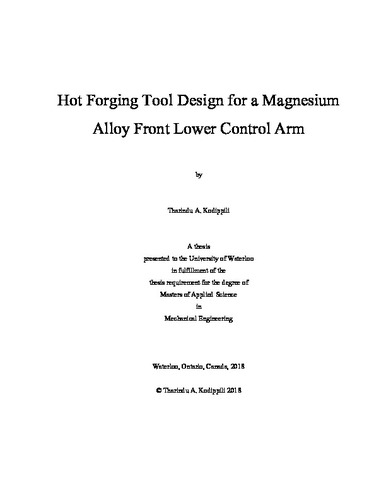 In an effort to improve fuel economy standards in the automotive industry, the use of lightweight materials to manufacture fatigue-critical components is investigated by a large group at the University of Waterloo. Prior research into the development of a front lower control arm made of a magnesium alloy has produced a design approximately 35% lighter in mass to its cast aluminum benchmark. A hot forging tool was designed and developed to produce forgings of this control arm design in a single-hit operation. The as-forged component will have has a shape of a near-complete arm with excess flash, requiring subsequent trimming and finishing operations. The tool was designed for a low-volume production rate and batch size – tool wear was neglected – at a maximum operational temperature of 400°C and a loading capacity of 1600 tonnes. The tool design was successfully validated using thermal and mechanical simulations. Forging materials and conditions were initially chosen based on literature. At a later time, an analytical material selection model or objective function was developed by other members involved in the project. As part of a secondary study, the structural and fatigue behaviour of the control arm forged at conditions selected using the analytical model were evaluated to gauge its effectiveness as a selection tool. Results were inconclusive due to lack of complete material models. However, through simulation, it was shown that a control arm forged at 250℃ using an extruded AZ80 alloy will meet OEM performance requirements.