Comparison of Experimental Methods in the Measurement of Wind Turbine Wakes 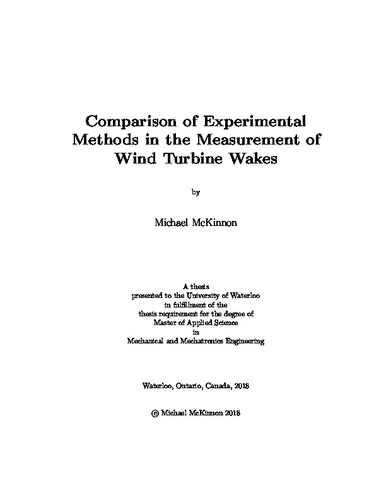 With the increasing development of wind energy, it has become essential to study the interactions of turbines within wind farms. Wind turbines create wakes when harnessing the energy in the wind for electricity. Reduced velocities in the wakes and increased turbulence pose problems on nearby turbines. Therefore, to better understand the behaviour of wakes, experiments were conducted at the University of Waterloo Wind Generation Facility to study the behaviour of a wake behind a 3.3 m diameter turbine. To ensure accuracy of measurements inside the facility, the flow distribution was measured upwind of the turbine to obtain a profile. This was completed through the development of a structure to orientate pitot tubes in front of the area of the turbine. The device allowed for various fan configuration settings of the facility to be tested to attempt to obtain an even flow distribution profile. A completely uniform flow distribution could not be achieved, however improvements to the profile were made. Experiments were conducted through the use of ow visualization techniques to gain an initial understanding of the behaviour of the wake in both un-yawed and yawed turbine configurations. This was performed in two methods, to ignite a smoke emitter upstream of the turbine blade and to ignite smoke emitters on the blade tips of the turbine. Using the upstream smoke technique, the tip vortices could be seen to shed from the blades as they moved through the stream of the smoke. The vortices propagated downstream with the movement of the flow. The helical wake distribution of the wake could be seen using the blade ignited smoke technique. An estimate of the wake characteristics were obtained from this experiment, resulting in an approximate near wake length of 1.6 rotor diameters and helix angle of 30°. Measurements of the wake of a wind turbine in un-yawed and yawed positions were conducted using three different measurement methods to gain an understanding of the wake behaviour in the range of 3 rotor diameters downstream of the turbine. The pitot tube structure previously developed was used to measure a two-dimensional profile of the wake at various downstream positions. With this method, the wake centre could be seen as well as temporal changes in the wake. A sonic anemometer was used to traverse the wake at hub height to obtain a horizontal velocity profile at various downstream distances. The velocity profile showed the decay of the wake as well as detection in the yawed turbine measurements. LiDAR measurements were collected by scanning the wake at hub height to obtain a flow distribution throughout the wake of the turbine. Through these measurements a clear wake profile was developed, which showed how the velocity profile progressed behind the turbine. When the turbine was yawed, the wake was seen to detect in the direction of the yaw angle.