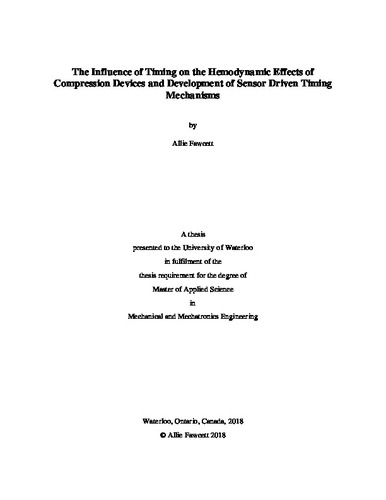 Long periods of reduced mobility are associated with formation of blood clots in the deep veins of the legs, referred to as deep vein thrombosis (DVT). DVT has been noted as a large factor of morbidity and mortality in clinical settings as the clots can move from the legs to the lungs causing blockages, known as pulmonary embolisms. Preventing venous stasis has been clinically linked to preventing DVT formation. Venous stasis can be prevented by applying active mechanical compressions to the lower limbs, such as with an intermittent pneumatic compression (IPC) device; these devices have been clinically shown to reduce venous stasis and thereby prevent DVT formation. The main objectives of this thesis were to assess and improve a custom cardiac gated compression (CGC) system that times compressions based on an individual’s heartrate so as to only apply compressions during the diastolic phase of the cardiac cycle. A comparative performance assessment was done by measuring the central and peripheral hemodynamic changes induced by the use of different IPC devices (ArjoHuntleigh Flowtron ACS800 (Flowtron), Kendall SCD Express (SCD), Aircast Venaflow Elite (VenaFlow), and the custom CGC system) on 12 healthy human subjects in both seated and supine positions. The four selected compression devices had similar applied pressure levels, but dramatically different application profiles with regards to timing and method of application (e.g., single uniform bladder versus sequential inflation from ankle to knee). In addition, the compression systems were delineated by “smart” versus fixed timing, with two devices employing physiological measures to adjust when compression occurred (SCD: slow inflation based on vascular refill time; CGC: rapid inflation based on cardiac gating), and two inflating at fixed intervals (VenaFlow: rapid inflation; Flowtron: slow inflation). The devices were tested for ten minutes while heart rate, stroke volume, cardiac output, calf muscle oxygenation, and femoral venous and superficial femoral arterial velocities measures were collected. From the femoral venous velocities, the velocity per minute, peak velocity during the compression period, and the displacement per compression and per hour were used as performance metrics. With respect to the peak velocity the VenaFlow resulted in higher results than all other devices; likely due to its rapid inflation characteristics and the frequency of compressions allowing pooling to occur in the legs. However, in the performance metric of average displacement per compression the Flowtron and SCD resulted in the greatest displacements; likely because of the devices’ longer inflation periods resulting in a longer increase in venous velocity per compression. However, this measure does not account for the frequency of compressions unlike the displacement per hour measurement; the displacement of venous blood per hour resulted in the CGC device performing as well as the slow inflation devices during supine and resulted in greater displacement than all other devices in the seated position. The CGC also resulted in a sustained increase on the systemic and peripheral hemodynamics in the measures of SV when seated, and arterial velocity and muscle oxygenation when seated and supine; this can potentially be attributed to the device’s cardiac gating and resultant compression frequency. Interestedly, the Flowtron and SCD’s behaviour in most measures taken at steady state were not significantly different despite the “smart” timing employed by the SCD. The current timing mechanism of the CGC device is based on the previous R-R interval of the electrocardiograph (ECG) trace and a fixed pulse wave transit time. Due to heart rate variability and changes in vascular conductance, the compressions of the CGC could be more reliably triggered based on a local measurement of the pulse arrival. To address this need, a custom pulse sensor that uses photoplethysmography (PPG) to detect the pulse in the lower limb was developed. Key problems that impact wearable PPG sensor performance are motion, the power requirements of the LEDs and the ability to work on darker skin pigmentations. The sensor design was done with the primary objective of reliably and robustly detecting the pulse wave arrival regardless of skin tone or application location, and the secondary objective of maximizing the battery life of the sensor for future potential applications in wearable technologies. The developed sensor is reflectance-based and employs 6 independently controlled light emitting diodes (LEDs) surrounding a single photodiode. The independent control enables the “best” LED configuration to be selected through an in situ calibration cycle that results in the strongest signal at the lowest power setting required for different skin pigmentations in non-motion and motion conditions. The shin, in comparison to the foot and ankle, was determined as the best measurement location in terms of motion resistance and low power requirements. Furthermore, the calibration cycle proved to effectively adapt to the underlying physiology and find the LED configuration that resulted in the strongest pulse signal at the lowest possible power setting for each individual. Therefore, as the PPG sensor was proven to work effectively from the lower limb, further improvement to the timing of compressions for the CGC device may be possible through the integration of the peripheral pulse detection sensor.

Allie Fawcett (2018). The Influence of Timing on the Hemodynamic Effects of Compression Devices and Development of Sensor Driven Timing Mechanisms. UWSpace. http://hdl.handle.net/10012/14024