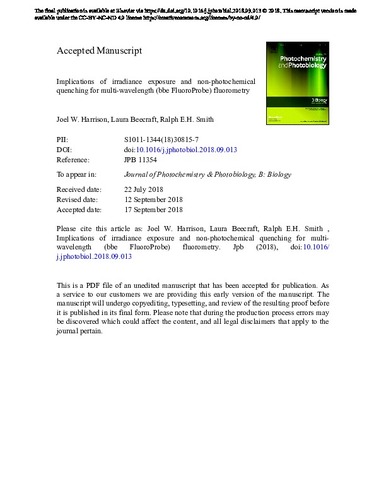 Multi-wavelength fluorometers, such as the bbe FluoroProbe (FP), measure excitation spectra of chlorophyll a (Chl-a) fluorescence to infer the abundance and composition of phytoplankton communities as well as the concentration of chromophoric dissolved organic matter (CDOM). Experiments were conducted on laboratory cultures and on natural communities of freshwater phytoplankton to determine how the response of phytoplankton to high irradiance might affect fluorometric estimates of community composition and concentrations of Chl-a and CDOM. Cultures of a representative cyanobacterium, bacillariophyte, synurophyte, cryptophyte, and chlorophyte revealed changes in Chl-a excitation spectra as irradiance was increased to saturating levels and non-photochemical quenching (NPQ) increased. The degree of change and resulting classification error varied among taxa, being strong for the synurophyte and cryptophyte but minimal for the cyanobacterium. Acute-exposure experiments on phytoplankton communities of varying taxonomic composition from five lakes yielded variable results on apparent community composition. There was a consistent decrease in CDOM estimates, whereas Chl-a estimates were generally increased. Subsequent exposure to low PAR relaxed NPQ and tended to reverse the effects of high irradiance on composition, total Chl-a, and CDOM estimates. Relaxation experiments on near-surface communities in a sixth, large lake, Georgian Bay, showed that total Chl-a estimates increased by 44% on average when dark treatments were used to relax NPQ, though, in contrast to the findings from the small lakes, there was little effect on CDOM estimates. We observed a statistically-significant, negative linear relationship between the photon flux density of in situ irradiance and the accuracy of taxonomic assignment by FP in Georgian Bay. Not discounting the correlations between light intensity and the accuracy of the FP that were observed in this study, we conclude that the applicability of the reference spectra to the system under investigation is a more important consideration than variability in natural irradiance conditions.