One versus two eyes makes a difference! Early face perception is modulated by featural fixation and feature context 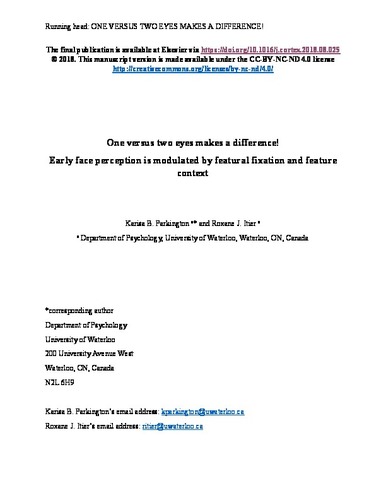 The N170 event-related potential component is an early marker of face perception that is particularly sensitive to isolated eye regions and to eye fixations within a face. Here, this eye sensitivity was tested further by measuring the N170 to isolated facial features and to the same features fixated within a face, using a gaze-contingent procedure. The neural response to single isolated eyes and eye regions (two eyes) was also compared. Pixel intensity and contrast were controlled at the global (image) and local (featural) levels. Consistent with previous findings, larger N170 amplitudes were elicited when the left or right eye was fixated within a face, compared to the mouth or nose, demonstrating that the N170 eye sensitivity reflects higher-order perceptual processes and not merely low-level perceptual effects. The N170 was also largest and most delayed for isolated features, compared to equivalent fixations within a face. Specifically, mouth fixation yielded the largest amplitude difference, and nose fixation yielded the largest latency difference between these two contexts, suggesting the N170 may reflect a complex interplay between holistic and featural processes. Critically, eye regions elicited consistently larger and shorter N170 responses compared to single eyes, with enhanced responses for contralateral eye content, irrespective of eye or nasion fixation. These results confirm the importance of the eyes in early face perception, and provide novel evidence of an increased sensitivity to the presence of two symmetric eyes compared to only one eye, consistent with a neural eye region detector rather than an eye detector per se.