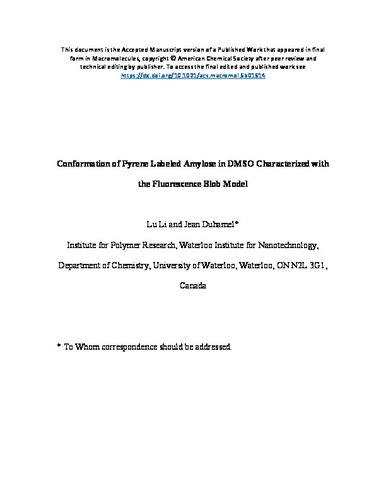 Amylose and poly(methyl acrylate) were randomly labeled with pyrene to yield a series of Py-Amylose and Py-PMA constructs, and their ability to form excimer in DMSO was characterized quantitatively by steady-state and time-resolved fluorescence. First, the ratio of the fluorescence intensity of the excimer over that of the monomer, namely the I-E/I-M ratio, was obtained from the fluorescence spectra. Second, the product < k(blob) X N-blob > was obtained from the fluorescence blob model (FBM) analysis of the fluorescence decays. Both I-E/I-M and < k(blob) X N-blob > yielded similar values when expressed in terms of moles of pyrene per backbone atom for Py-Amylose and Py-PMA. Since IE/IM and < k(blob) X N-blob > reflect the efficiency of pyrene excimer formation, the similar behavior observed for both parameters obtained for rigid amylose and flexible PMA could only be rationalised by postulating that amylose adopted a compact helical conformation in DMSO. To confirm whether this was possible, molecular mechanics optimizations were conducted with the HyperChem program on Py-Amylose assuming a helical conformation for amylose in DMSO. Two pyrene labels were found to overlap properly, and thus form excimer efficiently, if they were separated by no more than five anhydroglucose units up and down the amylose helix around the anhydroglucose unit bearing the reference pyrene label. This result suggested that excimer formation would not occur if two pyrene labels were separated by more than 5 + 5 + 1 = 11 anhydroglucose units, in perfect agreement with our findings that < N-blob > obtained from the FBM analysis of the fluorescence decays acquired with the Py-Amylose solutions in DMSO equaled 11 +/- 2. The good agreement between simulations and experiments led to the conclusion that amylose must adopt a helical conformation in DMSO.