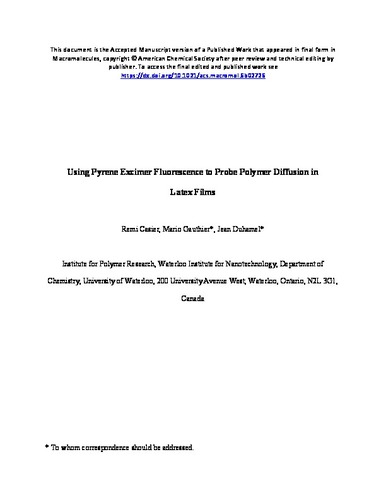 This study introduces a simple technique that can be used to quantitatively probe interparticle polymer diffusion (IPD) between adjacent particles in a latex film using pyrene excimer fluorescence (PEF). To demonstrate the validity of the technique, four latexes were prepared: two pyrene-labeled poly(n-butyl methacrylate) (Py-PBMA) latexes and two nonfluorescent PBMA latexes. The two pairs of Py-PBMA and PBMA latexes had similar distributions of polymer molecular weight and particle diameters. Mixtures of latex dispersions having a composition of 5 wt % Py-PBMA latex and 95 wt % nonfluorescent PBMA latex were cast into films. Fluorescence spectra of the films were acquired, and the ratio of the fluorescence intensities for the pyrene monomer (I-M) and excimer (I-E) was calculated to determine the I-E/I-M ratio. The latex films were then annealed at a constant temperature set between 75 and 119 degrees C. The fraction of mixing (f(m)), representing the amount of polymer having diffused out of a particle, was determined by monitoring the change in the I-E/I-M ratio as a function of annealing time. The f(m) profiles were then analyzed to yield the polymer diffusion coefficients, and the apparent activation energy (E-a) for diffusion was found to equal 179 +/- 7 and 170 +/- 12 kJ mol(-1) for the high and low molecular weight chains, respectively. The c(1) and c(2) parameters in the WLF equation were calculated to be 11 +/- 2 and 170 +/- 30 K, respectively. The E-a values and c(1) and c(2) parameters were in close agreement with values previously found for PBMA by other techniques, suggesting that the PEF experiments provide a valid experimental means to probe IPD in latex films. The superiority of PEF over earlier procedures includes the extreme simplicity of the experimental method that involves the labeling of a single latex particle and the use of ratios of fluorescence intensity. It opens new research venues in the study of IPD during latex film formation.