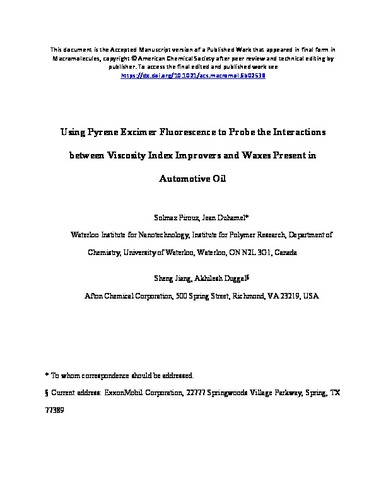 A new methodology based on pyrene excimer fluorescence (PEF) was applied to quantitatively measure the actual level of intermolecular association between ethylene propylene (EP) copolymers in toluene in the presence of wax, an intrinsic component of engine oils. EP copolymers are commonly used as viscosity index improvers (VIIs) in engine oils. Unfortunately, waxes in engine oils thicken the oil and are suspected of associating with VIIs at low temperature. In this study, four EP copolymers were maleated to yield EP-MA and then fluorescently labeled with 1-pyrenemethylamine to yield Py-EP. Successful maleation and pyrene labeling were confirmed by Fourier transform infrared (FTIR) and UV vis absorption spectroscopy. The solution behavior of the EP copolymers in the presence of wax was characterized by PEF, which was used to quantitatively measure the molar fraction of intermolecular interactions (f(inter)) between EP copolymers in the absence or presence of wax. The fraction fin, was determined through the analysis of the fluorescence spectra of the Py-EP solutions acquired as a function of temperature. Upon excitation, the Py-EP solutions generated excimer upon encounter between an excited and a ground-state pyrene. The ratio of the excimer fluorescence intensity (I-E) over that of the monomer (I-M) yielded the I-E/I-M ratio which was employed to determine fin,. Plots of f(inter) as a function of temperature provided a description of the solution behavior of a given VII with or without wax present in solution. The results of this study indicate that wax in solution binds onto EP copolymers dissolved in toluene, which increases macromolecular associations as reflected by an increase in f(inter) The formation of microcrystals between semicrystalline EP copolymers, however, induces strong polymer polymer interactions that result in the dissociation of the wax from the polymers.