Skeptics and Unruly Connectives: A Defence of and Amendment to the Non-Factualist Justification of Logic 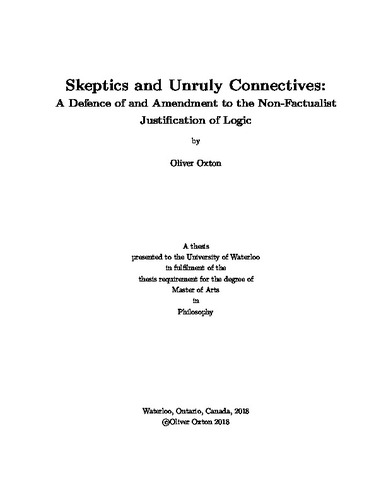 This thesis attempts to positively solve three problems in the foundations of logic. If logical connectives are defined by their introduction and elimination rules, then how might one prohibit the construction of dysfunctional rules, i.e. rules which let us infer anything from anything else? How might one be held accountable to the consequences of those logical rules that they accept in an argument? And, how might one who, for whatever reason, doubts those logical rules regularly taken for granted, be convinced to adopt deductive ‘best practices?’ A variety of positions in the foundations of logic are reviewed, but it is found that each either fails to answer all questions together, or leads one to troubling epistemic conclusions. This thesis attempts to draw broad lessons from those positions otherwise found wanting, and then builds on the seemingly most plausible perspective; namely, non-factualism. Particularly, it is argued that non-factualism fails to distinguish between epistemic values and epistemic domains, and that the consequence of this distinction allows one to effectively compare the success of their deductive practices with the skeptic.

Oliver Oxton (2018). Skeptics and Unruly Connectives: A Defence of and Amendment to the Non-Factualist Justification of Logic. UWSpace. http://hdl.handle.net/10012/13969