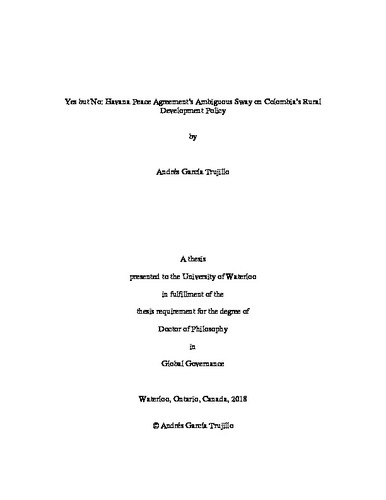 On 24 November 2016, the Colombian government and the Revolutionary Armed Forces of Colombia (FARC) signed a peace accord to end a six-decade war. One of the items included in the accord was the Comprehensive Rural Reform (CRR), an agreement laying out substantive measures on rural development aimed at improving land access, public goods provision and peasant’s agricultural supports. This thesis explores whether negotiated transitions can serve to enact distributive rural change through an in-depth examination of the relationship between Colombia’s rural development policy and the peace accord. It traces the antecedents, negotiation and early implementation of the CRR. The thesis draws from my direct involvement in the peace process as a government advisor and three years of fieldwork in Bogotá. In order to explain both the CRR’s emergence and the reasons for its ambivalent effect on policy, the thesis develops a framework that weaves together insights from three strands of literature – agrarian political economy, peace implementation and institutional change. By connecting global economic trends, emerging norms, and domestic political dynamics, this framework enables an analysis that captures how the exceptional circumstances of the transition in Colombia influenced policy outcomes. The thesis argues, on one hand, that the peace agreement did open policy space for a distributive rural agenda. This policy space gained leverage due to two factors: first, favorable global and domestic norms appropriated by key decision makers during the negotiation phase; and second, the drafting of robust provisions in the peace agreement translatable into policy actions. On the other hand, the thesis shows that once the negotiation ended, the reform’s scope for change was severely constrained by internal and external obstacles faced by the government. Internally, policy capture by agribusiness elites, coupled with a lack of bureaucratic coordination in the implementation and political pressures exerted by the government’s coalition to move away from the CRR, effectively undermined the government’s distributive agenda. Externally, a strong right-wing opposition heavily affected the legitimacy of both the government and the peace process overall.