The Phenomenological Origins of Property 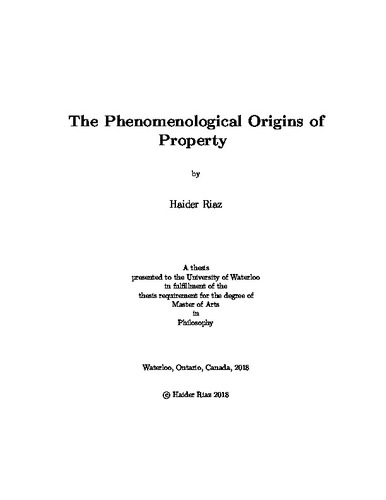 This thesis delineates the phenomenological basis of ownership and property. The phenomenological theory of property has three main elements: the minimal self, the relationship between the sense of agency and the sense of ownership, and the psychological phenomenon of associative self-anchoring. The well established neurocognitive concept of the minimal self encapsulates a person’s immediate self-consciousness, and the non-conceptual senses of agency and ownership are two integral constituents of this immediate sensory experience. Notably, this sense of self is typified by a motor intentionality (i.e., the minimal self is primed for goal-directed actions). The motor character of the minimal self primarily manifests itself in the construct of the body schema—a dynamic mental model of the body that functions as an instrument of directed action. A remarkable feature of the body schema is that it expands to incorporate extracorporeal objects that are objectively controlled by the person (e.g., grasping a pen or holding an umbrella). Moreover, this embodiment of extracorporeal objects is accompanied by the phenomenological feeling of ownership towards the embodied objects. In fact, I demonstrate with the aid of empirical evidence from cognitive neuroscience and neuropsychology that the sense of ownership and the sense of agency are inextricably linked, and that the sense of agency modulates (engenders) the sense of ownership. In other words, the mere experience of agency over an object is capable of evoking the sense of ownership—the influence of the sense of agency in eliciting the sense of ownership is moderated by gestalt-like principles of priority, consistency, and exclusivity. In addendum, the non-conceptual sense of ownership is shaped and strengthened by the formation of implicit self-object associations—people psychologically associate themselves with their possessions. Altogether, the motor-intentional nature of the self, the inherent sensory experience of ownership, and the capacity to establish self-object psychological associations make the concept of personal property a natural correlate of mechanisms that lead to the development of self-perception and representation. The phenomenological theory also elucidates the psychological literature on ownership judgments and the vague concept of intellectual property. It is also emphasised that aspects of this property theory are analogous to Hegel’s theory of property. As a result, the phenomenological theory may have implications for Hegelian conceptions of property, and can aid them in determining legitimate property relations—these typically denote a close connection between property and personhood.