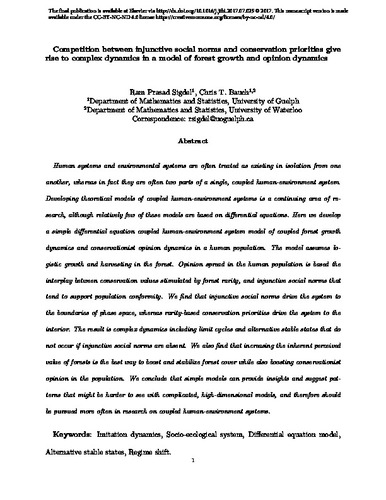 Human and environmental systems are often treated as existing in isolation from one another, whereas in fact they are often two parts of a single, coupled human-environment system. Developing theoretical models of coupled human-environment systems is a continuing area of research, although relatively few of these models are based on differential equations. Here we develop a simple differential equation coupled human-environment system model of forest growth dynamics and conservationist opinion dynamics in a human population. The model assumes logistic growth and harvesting in the forest. Opinion spread in the human population is based on the interplay between conservation values stimulated by forest rarity, and injunctive social norms that tend to support population conformity. We find that injunctive social norms drive the system to the boundaries of phase space, whereas rarity-based conservation priorities drive the system to the interior. The result is complex dynamics including limit cycles and alternative stable states that do not occur if injunctive social norms are absent. We found that the model with injunctive social norms had five possible observable outcomes, whereas the model without social norms had only two stable states. Thus social norms and have dramatic influence in conservation dynamics. We also find that increasing the conservation value of forests is the best way to boost and stabilize forest cover while also boosting conservationist opinion in the population, although for some parameter regimes it can also give rise to long-term oscillations in opinions and forest cover. We conclude that simple models can provide insights and reveal patterns that might be difficult to see with high-dimensional computational models, and therefore should be used more often in research on coupled human-environment systems.