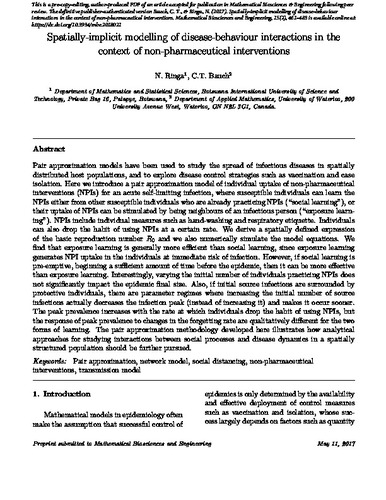 Pair approximation models have been used to study the spread of infectious diseases in spatially distributed host populations, and to explore disease control strategies such as vaccination and case isolation. Here we introduce a pair approximation model of individual uptake of non-pharmaceutical interventions (NPIs) for an acute self-limiting infection, where susceptible individuals can learn the NPIs either from other susceptible individuals who are already practicing NPIs ("social learning"), or their uptake of NPIs can be stimulated by being neighbours of an infectious person ("exposure learning"). NPIs include individual measures such as hand-washing and respiratory etiquette. Individuals can also drop the habit of using NPIs at a certain rate. We derive a spatially defined expression of the basic reproduction number R-0 and we also numerically simulate the model equations. We find that exposure learning is generally more efficient than social learning, since exposure learning generates NPI uptake in the individuals at immediate risk of infection. However, if social learning is pre-emptive, beginning a sufficient amount of time before the epidemic, then it can be more effective than exposure learning. Interestingly, varying the initial number of individuals practicing NPIs does not significantly impact the epidemic final size. Also, if initial source infections are surrounded by protective individuals, there are parameter regimes where increasing the initial number of source infections actually decreases the infection peak (instead of increasing it) and makes it occur sooner. The peak prevalence increases with the rate at which individuals drop the habit of using NPIs, but the response of peak prevalence to changes in the forgetting rate are qualitatively different for the two forms of learning. The pair approximation methodology developed here illustrates how analytical approaches for studying interactions between social processes and disease dynamics in a spatially structured population should be further pursued.