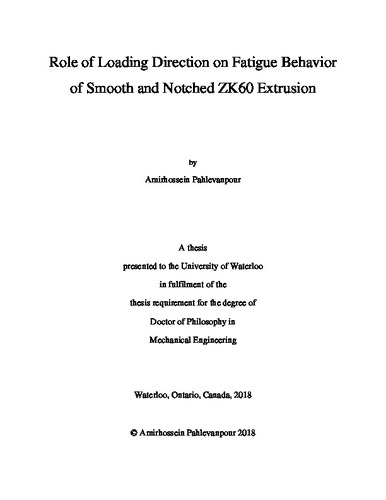 In spite of the increasing trend of magnesium (Mg) application over the last decade, numerous technical restrictions still limit Mg alloy’s extensive implementation in industry. For instance, many mechanical behaviors of Mg alloys are still unknown, which make them risky options for manufacturers who prefer to be well-informed about raw materials’ characteristics so as to maximize their product reliability. Therefore, a comprehensive characterization in conjunction with life assessment via empirical models is needed to expand these alloys’ application. A literature review has revealed the potential of energy-based models to be employed in strain- and stress-controlled modeling of wrought alloys. However, to the best of the author’s knowledge, no study is available yet on the anisotropic fatigue behavior and modeling of smooth and notched ZK60 extrusion, which is the focal point of this research. The quasi-static and strain-controlled fatigue characteristics of ZK60 extrusion have been investigated along three different directions: the extrusion direction (ED), the radial direction (RD), and 45° to the extrusion direction (45°). The quasi-static response showed symmetric behavior for the samples tested along RD and 45°, whereas ED samples manifested completely asymmetric behavior. Although the ED samples exhibited longer fatigue lives than the RD and 45° in the high cycle fatigue, the fatigue lives in the low cycle fatigue regime were similar. Microstructural analysis revealed finer grains for ED, thereby higher strength for this direction. Moreover, the texture measurement indicated a sharp basal texture justifying asymmetric behavior solely along the ED direction. Higher tensile mean stress and less dissipated plastic energy per cycle for the ED samples, acting as two competing factors, were the principal reasons for showing identical fatigue responses to those of RD and 45° in the low cycle fatigue regime. The fracture surface in the ED direction was dominated by twin lamellae and profuse twined grains, whereas slip bands were dominant on the fracture surface in RD direction. Smith-Watson-Topper, as a critical-plane strain-based criterion, and Jahed-Varvani (JV), as an energy-based damage criterion, were employed to predict the strain-controlled fatigue lives along all directions using a single set of material parameters. Fully reversed stress-control condition was also investigated over a wide range of stress amplitudes along two different material directions: ED and RD. The in-plane random texture along RD promotes activation of twinning/detwinning deformations in both tension and compression reversals, which brings about a sigmoidal but near-symmetric shape for hysteresis loops along this direction. The stress-strain response along ED is asymmetric in tension and compression reversals if subjected to high-stress amplitudes. The asymmetry is attributed to different deformation mechanisms being active in the tension and compression reversals. Overall, loading along ED yields superior fatigue performance compared to RD. One set of JV coefficients extracted from the strain-controlled tests was employed and successfully modeled the anisotropic stress-control fatigue response of the material. The effect of a material’s orientation on the fatigue response of notched ZK60 extrusion was investigated via fully reversed stress-controlled experiments in ED and RD. The anisotropy observed in the stress-life curves of the notched ED and RD samples resembles the stress-controlled fatigue performance of the smooth samples. This observation is attributed to the higher strength of ED specimens, which imposes less plastic-induced-damage in the stress-controlled fatigue experiments. The ED specimens exhibit not only superior fatigue performance but also higher notch sensitivity while loading along RD significantly reduces the notch sensitivity.